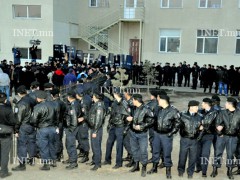 “There is going to be the arrest of former President Nambaryn Enkhbayar”. This message appeared all over Facebook and Twitter on 12th April. A few hours later the news  proved to be true. The former President, one of  Mongolia’s best known politicians was arrested.  Enkhbayar served as the Prime Minister from 2000 to 2004, the Speaker of Parliament from 2004 to 2005, and the President from 2005 to 2009 and is Chairman of the opposition party Mongolian People’s Revolutionary Party(MPRP).

The first attempt to arrest him on corruption charges was unsuccessful because his bodyguards and a number of supporters thwarted it. The second attempt by members of the  Independent Authority Against Corruption (IAAC) forces proved successful and he was arrested at his home on 13th April. The nation was shocked at the aggressiveness  and brutality of the arrest as highlighted by many TV shows that morning.

This arrest happened just one day after N. Enkhbayar released classified transcripts of high-level Government meetings that he and other political leaders had held with the National Security Council during the four-day state of emergency following  the June 2008 parliamentary elections which resulted in riots on 1st July. The riot of July 2008 took place four years ago when N. Enkhbayar was the President of Mongolia where five civilians were killed by gunfire and the headquarters of the former Mongolian People’s Revolutionary Party (MPRP) were burned down.The  MPRP came out victorious and  the  Democratic Party Chairman Tsakhiagiin Elbegdorj (present President of Mongolia) declared that the elections were rigged.

The UB Post mentions that the case of the police officers charged with killing during the July riots is yet to be settled four years after the incident. It has become highly politicized and was delayed by attorney strikes and court transfers. Roughly two months before Mongolians go to the polls in June, everyone is talking about who will shoulder responsibility for the riot of 1st July 2008. Even four years later, the question still remains unanswered.

The arrest of N. Enkhbayar led to unrest among citizens, especially among supporters of the MPRP. Civil society is divided into two camps as people discuss and argue this arrest. One side is saying that the arrest was illegal, that there was no warrant, the police were armed and threatened to use force and the real corrupt politicians who think they are above the law were afraid that Enkhbayar would reveal the truth behind the July 2008 riot. It asks whether it was a coincidence that he was arrested shortly after he released embarrassing data about what truly happened in the 2008 riots? Someone clearly wants to silence him, it says. First of all, his arrest was unconstitutional because he was enjoyed state immunity from prosecution which lasts for 4 years following his presidential tenure.

But the other faction talks about the arrest as a legal act.  “The Anti-Corruption Agency has asked N. Enkhbayar to come in for questioning numerous times. He didn’t show up. He is a person before the law like all of us. What kind of democracy allows some people to be above the law? That’s not democracy. The Anti-Corruption Agency had a legal arrest warrant from the court. None of the policemen or police officers were armed. An attempt to distribute classified materials is potentially an illegal act”, it says.

Whatever the difference of opinions might be, it is quite clear that a majority of the people are not willing to tolerate corruption or accept corrupt leaders anymore. They feel that if the former President is not guilty he should go and answer questions to help Mongolia and the Anti-Corruption Agency. But  it seems that he is not bothered about that!

Many agree that the attempt to distribute classified materials is illegal  and that the former President acted as if he is somehow above the law in addition to grabbing media attention through this. An attempt to involve the public in the arrest process is very self-centered and attention-seeking behavior. Although, the arrest was completely legitimate, the world thinks it was brutal. This battle against corruption is necessary for Mongolia.

Civil society is not willing to stand by and be a spectator to corruption and corrupt leaders even though they might be in position of power. Mongolia had its own revolution in 1990 and has developed into a dynamic democracy since then, holding its first multiparty elections the same year. Communism took a step back then, though elections have produced chaotic results in the country which have often affected policy-making.

Since we are living and learning in a new democracy and have had it for 22 years we should be able to call people in for questioning. It is our right! Even high ranking politicians should not escape the law. I am sure many of you would agree with this!