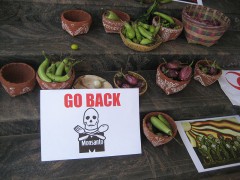 In Nepal, an announcement  by the US Embassy on September 2011 that 20,000 farmers would be “trained” to use “hybrid” seeds from Monsanto, as part of a USAID aid strategy, met with a storm of protests from activists.

Activists like Vandana Shiva have opposed the spread of genetically modified seeds in developing countries. Shiva’s article “The Seed Emergency: The Threat to Food and Democracy” discusses “seed sovereignty”—the notion that farmers are now independent with their open pollinated seeds, but will soon be under corporate control as companies make them dependent on seeds which have to be purchased each year. Farmers hooked on corporate seeds would mean billions in profits—not to the farmers themselves but to the corporations.

Companies are selling both GM and hybrid seeds. The USAID project in Nepal proposes to introduce hybrid seeds, not GM. But as with GM, hybrids “typically do not regenerate“–meaning farmers would have to buy them each year.

There’s also no guarantee that GM seeds work. Nepal saw a “seedless” crop of maize in 2009, attributed by agronomists to new seeds unsuited to Nepal’s ecology. Superweeds have sprung up in the wake of GM seeds. And recently scientists have warned  that the rootworm beetle that infests corn is developing a resistance to GM corn which has a toxin inserted in it to kill this pest.

Thousands of Indian farmers committed suicide after the chemical fertilizer and pesticide intensive, genetically modified BT cotton seeds sold by Monsanto failed in India. BT stands for Bacillus Thuringiensis, a bacteria used as a biological pesticide, and BT Cotton is cotton that has this bacteria genetically inserted into its seeds.  A quarter of a million farmers  in India have committed suicide since 1997, according to a IBN-CNN report—for various reasons, although indebtness caused by seed, fertilizer and pesticide costs is a major cause.

US Ambassador to Nepal Scott DiLisi’s attempts to “dialogue” with various groups appear to have led to a higher volume of public resistance against Monsanto. At last count, the US embassy still had not retracted its statement of “aid” which would bring Monsanto to Nepal with the support of the US government. The Nepali government, meanwhile, have said they have no idea what the American embassy was talking about.

The US Embassy has put out a statement to address concerns, saying hybrids were different from GM seeds. What the US Embassy didn’t address is that Nepal is already self-sufficient in open-pollinated seeds. It could also support the government of Nepal in developing its own hybrid seeds–instead of training 20,000 farmers to use seeds from Monsanto. Introducing hybrids that have to be bought from Monsanto each year would indebt farmers who are already cash-poor. This statement from the US Embassy: “So great is this demand that the maize hybrid seed market in Nepal is growing at 10-15 percent per annum” is especially troubling since it indicates that farmers start losing their reproductive seed stock as they become more dependent on commercial hybrids.

Links between high ranking officials in the US government and Monsanto are well-documented. European countries are effectively resisting the GM lobby, despite clear pressure from US diplomats, according to CBS news. These countries have also enforced regulations which restrict GMO into their markets. France recently banned genetically modified corn from Monsanto.

Activitists charge that Monsanto has used “humanitarian” agendas by partnering with the Gates Foundation, state department and USAID to control the seed business in Africa. Pushing industrialized agriculture dependent upon herbicides, chemical fertilizers and transgenic seeds could lead to further hunger and dispossession among small farmers in Africa, they predict. Farmers get into debt each year to buy this seed—making them vulnerable to moneylenders and high interest rates.

According to this BBC report,  “Mr Gates said his programme aimed to reduce the practice through supplying new, more productive seeds, conducting soil surveys and putting up capital for easier loans to buy seeds and fertilisers.” Instead of making farmers self-sufficient in open-pollinated seeds and organic fertilizers easily made by composting organic remains, Mr Gates is now involved in the business of indebting farmers.  Well documented studies show organic yields can surpass those of industrialized agriculture. In Bill Gates’ 2012 annual letter posted on the Foundation website, he fails to mention that he is talking about genetically-modified seeds–the word is not mentioned once. However, he does make a oblique reference to companies making these products “royalty-free” to poor farmers. No mention is made of the enormous costs to the farmer in term of annual purchase of seed, pesticide and fertilizer.

Bill Gates has worked hard over the past decade through his Foundation to eradicate polio and other communicable childhood diseases. India is now free of polio thanks to his initiative. But can a social change activist also be quietly investing in a company whose modes of operation undermine the fundamentals of small farmer and food security?

Governments must take into account the voices of farmers, activists and food security innovators worldwide who use organic, sustainable methods of farming to feed the world. As the Nepali case shows, any attempts to undermine these efforts with a corporate and technocratic takeover of the most basic unit of farming—seed—is being closely watched by a democratic public.

Sushma Joshi is a writer from Nepal. She has a BA in international relations from Brown University.