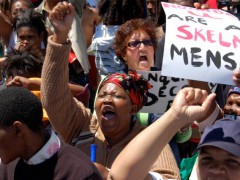 In 2008, I left my English homeland bound for South Africa. I had no prospective job, no fixed plans or abode, no fantastic business idea that was going to land me a fortune.

But as an aspiring journalist still green/naive enough to think that I might be able to change the world somehow, I remained pretty clear as to my motives.

For me, England was cold, tired, stale, bitter and boring. South Africa, by contrast, was exotic, dangerous, young and exciting and, at least on paper, home to a pulsatingly progressive and shiningly new constitutional democracy. And the South African press was, of course, a true pillar that bound this very democracy together. After decades of propaganda-riddled, indoctrinating apartheid-era media, the free press meant so much, could do so much. It was so important, so crucial to both the whole resistance movement that had toppled apartheid and to the ongoing move towards the overall transformation of the country. Everyone seemed to see it, to cheer it on. I wanted, more than anything, to be part of this revolution.

But four years later, this idealistic vision is under serious threat. Whilst I try to remain upbeat, it is hard to deny that I am living in a country where corruption, nepotism, and factionalism are increasingly the only certainties of the political system. And sadly it seems that the democratically-elected African National Congress (ANC) government has become all too willing to reverse so much of the democratic progress that has been achieved in South Africa in an attempt to mask their starring role in perpetuating this tripartite blight that is rotting South African politics.

So it is, that without any apparent irony whatsoever, our supposedly representative government is continuing to try to push through the much-contested Protection of State Information Act (aka the Secrecy Bill), a suffocating piece of legislation that would have made the apartheid legislators themselves proud.

If the bill passes, the ANC would have the power to classify whatever documents they consider it in the “national interest” to do so and to prosecute any investigative journalists or whistleblowers (and potentially even their family or friends!) for up to 25 years jail time if such classified documents are made public.

Most dangerously, the Secrecy Bill omits any kind of “public interest” clause. Traditionally, the idea of the “public interest” is both a shield for journalists’ self-preservation and a generally core aspect of democratic free press. The standardized argument put forward by free press ethics would be that if the government, which is elected by the public, is not behaving responsibly or is engaging in illegal activities, it is in the “public interest” for this to be exposed. Carrying out investigative journalism without any “public interest” protection behind you is a little like trying to drive at night without any lights.

At present, hardly a day passes in South Africa where we are not informed by our local press of some kind of scandal involving ANC corruption. It all seems to be turning into a John le Carré  novel, what with sexual assault charges, siphoning of funds, an Arms Deal or two, and a little too much flirtatious behaviour with countries like Iran. With all these revelations in mind, it certainly isn’t hard to see why the ANC want to restrict the power of the press – the nation’s journalists just keep doing their job too damn well and that isn’t helping the ANC party ratings.

But this is where the ruling party really shows their craftiness. The ANC originally sneaked the Secrecy Bill into parliament in June 2010, whilst the whole nation, including most of the media, was consumed by FIFA World Cup fever, and was either too drunk or too happy (or both) to notice. It was over a year later before the hangover had entirely worn off and anyone really started piping up. But once the cat was out of the bag, there was no chance of getting it back in.

And if there is one thing South Africans have learnt since the heady days of the fall of the last authoritarian regime, it is how to stomp their feet and whip up a healthy level of indignation when such things come to light. Statistics suggest that South Africans protest more than any other nation in the world. And true to form, since the start of 2012, activists and lobby groups have increasingly voiced their disapproval of the bill. There has been staged protests and marches around the country and outside various government buildings and parliament itself in Cape Town. Thousands of students at universities all over the country have also signed petitions against the Secrecy Bill.

One might easily be tempted to attribute the very recent removal of particularly draconian details of the original draft to the increasingly vocal opposition touched on here, but protesters and commentators alike are being careful not to get swept away by these small victories. The war for public interest defense still remains far from won.

Nevertheless the message of the South African people is clear: threaten to cut off one limb of our democracy, and we’ll find other limbs with which to hit back. We have already seen in North Africa and elsewhere what the power of social media and citizen journalism can do. Having fought so long to obtain a certain level of freedom, South Africans, journalists or otherwise, aren’t going to give it up again without a fight.