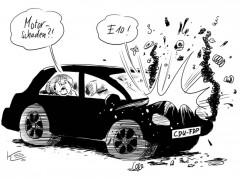 While it has Europe’s most powerful Green party and a leading renewables sector, Germany’s opportunistic politics and poor public communication campaigns are undermining environmental initiatives, including the much-touted E10 biofuel.

Germany might have the biggest share of Europe’s jobs in renewable energies but is it also leading in “green” politics? This can be doubted when we look at the latest developments in Germany’s energy policy. As the only country to have been governed by a Green Party as part of the 1998-2005 red-green alliance, Germany seems particularly well placed to develop coherent and sustainable environmental policies.

Although there seems to be a lot of support for Germany’s Green party, green politics don’t seem to translate in the same way. A coherent approach to fighting climate change stands and falls with the governing coalition of the ruling parties.

The Green Party came out as the major winner of the so-called 2011 super-election year: In the last regional election on Sunday 4 September the Greens jumped the five percent hurdle in Germany’s poorest state Mecklenburg-Vorpommern for the first time and now have seats in all 16 German states.

Discontent on the part of the public and NGOs alike has been nurtured by recent developments such as a “secret agreement” between the government and the German nuclear lobby and the unsuccessful launch of the new “E10” fuel which contains 10% biofuel. The most important task of a democracy and its political actors is to communicate – not only with one another but also with citizens. Communication in a democracy should be a dialogue between representatives and the represented.

It was lack of communication that turned the introduction of the new E10 biofuel, which contains 10 % biofuel in line with the 2009 EU directive prescribing a 10% mix of biofuels for road traffic by 2020 into a real flop. E10 is a mixture of 10 % of the biofuel ethanol – better known as alcohol – and 90 % conventional gasoline. It is already used in other EU member states such as Austria, Finland, France and the Netherlands and is made out of the fermentation of sugars derived from major food staples such as wheat, corn and sugar cane. A possible source of competition here between food and fuel can be easily seen.

Germany is quite strong in renewables as the Renewables 2011 Global Status Report shows. Especially in biodiesel production we are leading the list. Germany is the second biggest producer of ethanol in the European Union after France. But market success on the global scale doesn’t mean success in local terms.

Ever since its introduction in April 2011 the E10 biofuel has been rejected by German motorists. The main reason has to do with motorists uncertainties about how compatible E10 is with their vehicles. Yet manufacturers and politicians haven’t spent a single cent on clearing up misconceptions. Responsibility for the unsuccessful launch was shifted from the car industry to politicians and from politicians to the oil companies. It is widely seen as a failure of effective communication: the benefits of E10 are disputed, it is expensive and environmentally dubious.

Public/NGO discontent is very strong when it comes to biofuels in Germany. It is also related to the indirect land-use change impact of biofuels. The German NGO BUND, dedicated to preserving nature and protecting the environment, criticizes the fuel for causing indirect land-use change or ILUC. This unwieldy term refers to situations where any reduction in carbon emissions due to biofuels is cancelled out by the expansion of farmland it involves: in other words, ethanol production replaces that of food while forests are destroyed to make way for new food production.

Besides this, biofules also have other environmental impacts: biodiversity is endangered by monocultures, food prices affected, local communities displaced, etc. In its reports BUND quotes the numbers from the London-based Institute of European Environmental Policy (IEEP) that calculates that an area twice the size of Belgium would be needed to comply with the EU goal of replacing 10 % of EU-wide fuel consumption by biofuel.

This is a huge area and endangers those areas already dedicated to agriculture. In Germany land use for biofuels is also growing as can be seen from the table below. Farmers view this with trepidation as their land is also shrinking due to new projects in infrastructure and commercial use.

Citizens have to back the decisions of governments otherwise whole policies cannot be implemented, as the case of E10 biofuel strikingly shows.

My discussion table covered “renewable energies” whereas the other tables discussed topics such as “bridging technologies” and “energy efficiency”. We came up with a policy proposition for prioritizing waste products in the usage of biomass for energy creation. Our proposition was praised by the managing director of the regional association of BUND, citing the food vs. fuels dilemma and the negative conclusions of recent studies on biofuels in the future of transport.

Perhaps this kind of citizen involvement can help reconnect governments and the people. Social media like Facebook and Twitter offer new opportunities for governments to bring citizens into the implementation of policy. Yet this also depends on politics. What will the next elections bring in terms of a stable energy policy?