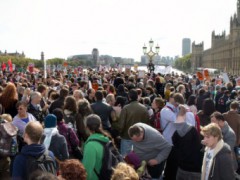 Established in 1948, the National Health Service (NHS) was a symbol of a new era – it was a symbol of a country which moved to bring good healthcare to all citizens as an important part of social welfare. Hospitals, doctors, nurses, pharmacists, opticians and dentists were brought together under one umbrella organization to provide services and ensure that they were free for everyone at the point of delivery. However, the NHS is now slowly being privatized with the Conservative-Liberal Democrat coalition government’s Health and Social Care Act passed in March 2012. Yet supposed modernization is done at the cost of rupturing the British symbol of patient equality, people’s trust in government and patient healthcare.

Personally, I have had mixed experiences when it comes to the NHS. At one point I had a bad dental filling done, and when trying to make  an appointment with a general practitioner (commonly called a GP),  I have to wait a day or two before I get it. However, at the same time I am entitled to free contraception which allows me to live my life productively and free of pain. Even though I don’t have a high income, I still have free access to most medical care, so I don’t need to worry about problems in paying my medical bills like Americans do. When I needed to see a specialist, I could do so, and although I waited almost two months, I still got the MRI I needed.  And on Saturday afternoon I can go to a walk-in centre if I need medical advice and my regular prescription medicine is there waiting for me.

In Britain last year’s budget set NHS spending in 2011-12 at £105.9 billion while this year’s budget revised that figure down slightly to £105 billion. These figures might sound big, yet Britain’s spending on health is not the highest when compared to other countries. Britain spends about 9.6 per cent of GDP on health and in numerical terms lags behind such countries as the United States (17.9 percent), Sierra Leone (13.1 percent), France (11.9 percent) and Rwanda (10.5 percent). This does not mean that most governments are not facing the  challenge of growing healthcare expenditure fueled by aging populations and the spread of chronic illnesses like diabetes and heart disease. With higher healthcare expenses and austerity measures driven by the financial crisis, there is a need to cut the costs of healthcare which are shifting slowly onto patients themselves and private sector providers.

Moves for the privatization of the National Health Service caused huge opposition among medical bodies and citizens alike. The Academy of Medical Royal Colleges opposed expanding the responsibilities of family doctors while thousands of people expressed their dissatisfaction on public marches and rallies. In the end the bill was passed in March 2012. This year will be crucial in deciding whether standards of healthcare have actually fallen. However, there are some signs that indicate the negative effects reform of the NHS is having on people.

For instance, it was revealed by the Health Service Journal and the Nuffield Trust, a health think tank, that between 2011 and 2013 only £500 million was actually saved. Yet instead of reinvesting this sum in new models of service delivery, these savings were raked back by the Treasury even though several NHS trusts were running at a loss. The Nuffield Trust also predicts that budget cuts of £4 billion between 2011 and 2015 will begin to impact on patients this year. A January edition of The Economist revealed that last July a man died of thirst in St George’s Hospital in Tooting, London. This month the closure of the Accidents & Emergency (A&E) department at University Hospital Lewisham (UHL) in London hit the news. The Lewisham area is a highly deprived and vulnerable area, and UHL’s A&E is only A&E there serving about 375,000 residents. The planned closure of the area’s only A&E will increase the district’s vulnerability and put an intolerable burden on neighboring hospitals’ resources and staff. Although it is a local matter, there are widespread concerns that the trend of departmental closedowns will continue and spread across England.

In the heat of all these concerns we sometimes forget to look for more innovative ways to provide healthcare to patients. What is becoming paramount here is that modern healthcare needs to move away from the traditional ‘cure-illness-only’ model to a ‘cure-and-prevent-it’ alternative. This could include such innovations as Brazil has already undertaken with its “city gyms” for 30,000 people with chronic diseases in the town of Recife. And during my trip to Beijing a few years ago I witnessed something I could never imagine in Britain – masses of elderly people taking keep fit gynmastic exercise in the streets and squares of the city.

Would you like to see such sights on the streets of London, Birmingham or Manchester? Author’s picture.

Closing hospital departments and cutting spending on healthcare cannot be the only measures taken by governments. But healthcare is expensive in our modern globalized world, and we need to find innovative ways of providing the same or an even better standard of healthcare to all citizens. Healthcare-for-all is a sign that in this globalized world governments actually do care for their citizens. So governments take action now to prove it!