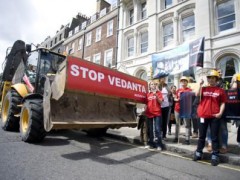 If tens of thousands of people, many of them women, are walking hundreds of miles from Gwalior in central India, to Delhi, the seat of government power, there must be an excellent reason why they are subjecting themselves to such hardship. After all, the other memorable  protest march in India was the one Mahatma Gandhi instigated – the Dandi march. Gandhi had a good reason for his 240-mile endeavour – to oppose the salt tax imposed by the British that made it illegal to sell or produce salt. As Gandhi said, “I regard this tax to be the most iniquitous of all from the poor man’s standpoint.”

The Gwalior-to-Delhi march is all about land—about whether millions of landless Indians can actually call a piece of land their own. Ekta Parishad, the organisation staging the march, believes that giving the poor access to land can be a “game changer” as only land and the generation of sustainable livelihoods can achieve a real reduction in poverty.  Before launching the Gwalior-to-Delhi march, Ekta Parishad had organized similar marches for almost a year across the whole country to create awareness and garner support for the landless.

Almost a year back, another organization, Greenpeace India, launched the Junglistan campaign which is still going strong rallying support against the destruction of forests for coal mining. Talking about the government’s stand on opening up more land for mining, Usha Saxena, a public engagement campaigner for Greenpeace India, said in a press release: “The ministry’s insistence on more land for mining is nothing short of land grab, which is also endangering our forests, our tigers, elephants and bears, biodiversity and the fabric of life of forest communities. We are inviting people to join Junglistan as a show of support to our forests.”

Over decades, India has been a reference point for environmental movements—the Chipko movement; the Narmada agitation; the Silent Valley agitation. And new ones are constantly emerging. Why? Because even now, scores of NGOs, activists and ordinary people are in conflict with the government and scores of corporations, both national and multinational, over policies, land, people and natural resources. The global mining giant, Vedanta has long been in the international spotlight over its attempts to mine bauxite in Orissa, on the east coast of India.

Future Challenges has done an email interview with Bratindi Jena of ActionAid India about the frequent clashes happening over the allocation and use of natural resources in the country.

Why is there such a mad rush for natural resources, land and forests? Is is greed, globalisation or are there other factors at play here?
BJ: I suppose it is both greed and globalisation. The want for more and more is leading us into this situation. It reminds me of Mahatma Gandhi’s famous quote – “Nature has enough for our need but not for our greed.” An insatiable thirst for material gain seems to be the root cause of why we are endangering nature and ultimately human existence on this planet.

You’ve led a highly successful struggle against Vedanta and the Orissa Government for years. How did you manage to keep such powerful people away from the Niyamgiri Hills and protect the Dongria Kondh tribals?
BJ: It may not be correct to say that I led it. Actually I am one of the many who constantly contributed to the ‘Save Niyamgiri Campaign’ and who are still contributing. Truth is as bright as a thousand suns and no thickness of dark cloud can ever overshadow the sun forever. And this is precisely what has happened. What we said about the Niyamgiri hills, Dongaria Kondha and Vedanta has been articulated in the reports of  high powered committees of the ministry and the courts. Not giving up in the face of all odds is another major factor in our struggle.

Do you think it is possible to strike a balance between “growth” and the rights of local people, farmers and tribals? Can companies actually bring the benefits of industrialisation to those people from whose lands they reap the profits? India has seen an immense struggle over Special Economic Zones and the acquisition of land.
BJ: It is important to understand what ‘growth’ really means. is it growth that is sustainable in the long term or growth that keeps sliding from so-called ‘double digits’ to single digits, badly impacting on everyone. If growth is positive, why are people opposed to it? And the ones opposing it need to be understood through the lenses of the least considered people – single women – and the most vulnerable communities (primitive tribal groups, tribals, dalits, fisherfolk). If we want sustained development and growth, it has to be inclusive and should benefit all. I doubt whether this can be ensured in the current mode of development.

Usually governments arrogate the right to land where politically-marginalised people have been living for thousands of years. How correct is it on the part of governments to claim ownership of such land? Can they give away such land in the name of development and growth?
BJ: It is not appropriate to deprive people of the place where they have lived for generations. They are also living and asserting their socio-economic, cultural and religious rights.

Do you think the Vedanta and Orissa goverment versus the Dongria Kondh tribals issue will set a precedent or will activists have to keep on fighting battles?

BJ: Let us hope that will be the case, but only time will tell.

The ActionAid campaign against bauxite mining in Indian hills by the UK-based company Vedanta.

All photographs are courtesy ActionAid/Bratindi Jena