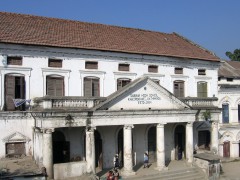 According to the United Nations Childrens Fund (UNICEF), only 46% of boys and 38% of girls attend secondary school in Nepal. The number of those pursuing education beyond secondary school level is even more dismal. The majority of young people are barely literate and ill equipped to compete in the rapidly changing economy. If education is the tool to empowering people and ensuring a country’s future, Nepal is lagging way behind, and current policies and political inteference in education are not helping either.

Durbar High School in Kathmandu, the first school in Nepal which opened in 1854. Photo taken by Kamal Ratna Tuladhar on Wikimedia Commons,CC BY-SA 3.0

Last week a group of political activists associated with ANNISU-R, the  All Nepal National Independent Students´ Union (Revolutionary) vandalized a school bus and attacked several colleges – because  they are opposed to Nepali educational institutions using “foreign” names. Republica reported that,

“All Nepal National Independent Students´ Union (Revolutionary) ANNISU-R has urged all the colleges to change their international names within a week.
Organizing a press conference here on Wednesday, ANNISU-R said it had to resort to vandalism of educational institutes for placing provocative advertisement and giving international names to schools. “

The government and law inforcement agencies allowed this violence to take place and so far none of the activists involved has been arrested or prosecuted.This incident is just a snapshot of how Nepal’s education sector is being exploited for political and ideological gains. Last year the Maoists demanded that private schools be banned. A couple of years ago the government proposed a 5% “education tax” on all private institutions. The way political parties push policies to fit their agendas and affect the hiring of teachers is enough to scare even the most patient souls.

It is no surprise then that the  majority of the country’s youth are incapable of competing in the global economy for well paid positions and are forced instead to labor in menial jobs. Every year thousands of young Nepali men and women migrate to India, the Middle East and South East Asia for employment – mostly as unskilled and semi-skilled laborers.

The cycle is vicious and startingly apparent. Poor education keeps the masses poor and  caught up in a struggle to survive which makes it difficult for them to protest against the attacks on education.While the majority struggles, a handful of economically strong and resourceful people manage to escape such a fate. Private schools in urban areas (and to a lesser extent in rural areas) have ample resources at their disposal and are thus able to weather political disturbances and the bullying of student unions. This makes public institutions with their budget crunch and outdated politics the real victims.

Every year hundreds of students fail to clear the “iron gate” to higher education – the School Leaving Certificate (SLC) examination. The national pass average is dismal – only 47.16% this year – and for public schools, particularly those in rural areas, the percentage is outrageously low. Some schools failed to produce even a single successful SLC candidate. According to Kantipur,

“Only 119,198 students out of a total of 326,633 (36.49 percent) got through SLC from the community schools, according to the Office of the Controller of Examination (OCE).
On the contrary, the pass percentage from private and institutional schools is over 84 percent. The success rate in community schools has dropped by more than 10 percent compared to last year’s 46 percent.
Though 77 percent of the examinees were from community schools, the private sector dominated the result despite its low presence of 23 percent.”

As the academic world turns away from standardized testing and “method” learning, the SLC test stubbornly remains the benchmark for Nepali students. It is no exageration to say that this test determines their higher education opportunities much more than whatever intellectual capacity they might have and no matter how diligent they might be. Public school student bodies, where the majority of students come from economically or socially disadvantaged backgrounds, are thus being systematically held back through poor education and fractured investment.

Sixteen percent of the national education budget is allocated for education whereas expenditure for general administration accounts for forty seven percent. The government is spending far more to run the system and handing out peanuts to vital sectors like education. In spite of the yearly disasters with the SLC examination and the flood of young people migrating to find work, no concrete plans have been announced to improve public schools or provide job training and assistance to unemployed young people.

“Baaluwa ma pani” (“watering sand”) is a popular Nepali saying  that encapsulates the sheer senselessness of Nepal’s education sector. Those with money and access will escape from the cycle; they will have the opportunity to learn and earn. Even if they fail to get a degree,they will have many more opportunities than the poor who have been fed a steady diet of sub-standard education in a politicized environment. The party leading the current government and the students unions claim to champion those disenfranchised by the elite. Perhaps it is time for them to see how their flawed policies and short-sighted actions are in fact helping the elite -sustaining and fostering them while holding back the poor.