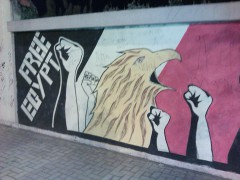 Artwork found on a wall in a street in Alexandria, Egypt shortly after the revolution of 2011. Photo By Salah El-Din Abdellatif (CC-0), Via Wikimedia Commons.

Ever since the eruption of the mass uprisings in 25 January 2011, the face of  politically stagnant Egypt has changed forever. 2011 was a year packed with unexpected events, unpredictable by even the most authentic intellectuals.

They started as early as 14 January when the leading opposition figure Mohamed ElBaradei announced that he would not be running for the presidency and justified his refusal by explaining that electing a president before a new constitution was drafted would be catastrophic for Egypt and its people, and would simply bring a new dictator to power. ElBaradei’s withdrawal was indeed a setback, yet it proved the man had true vision as was evidenced by the next series of setbacks.

On 22 November, the Islamist President Mohamed Morsy issued a so-called “constitutional declaration” where he announced various unconstitutional moves. Morsy sacked the prosecutor general of Egypt and appointed a new one, an illegal and unconstitutional act. What’s more, he also granted impunity to both the constituent assembly responsible for drafting the new constitution, and the Shura council, which was elected by only 7% of those eligible to vote, mainly Islamists. Most importantly, the declaration made all decisions taken by Morsy impervious to any judicial review. Hats off to Mr. ElBaradei!

Going back to January, and especially to the anniversary of the 25 January revolution, there was a worsening of the polarized climate we are currently suffering from in Egypt. On January 25, the Muslim Brotherhood and their political wing, the  Freedom and Justice Party, decided to “celebrate” the success of the revolution, while the actual revolutionary and civil forces were out protesting in the streets of Egypt demanding an end to the military rule of the Supreme Council of Armed Forces (SCAF).

The Brotherhood celebrations were actually justified, as they had gained more than 40% of the seats in the People’s Assembly and assumed its presidency during the Assembly’s first session on January 23. As the Assembly convened, the Brotherhood turned from an opposition group into a ruling party for the first time in their long history.

This goal was the first on thei Brotherhood’s list of aims. June 24 witnessed their second achievement, when the head of the Freedom and Justice Party Mohamed Morsy became president of Egypt, paving the way for more yet more success on the part of the Brotherhood. To put it bluntly, the Brotherhood’s achievements are the Egyptian people’s setbacks. The Brotherhood-dominated People’s Assembly granted them the power to rule in conjunction with SCAF, while the aspirations of the Egyptian people were discarded.

Morsy as president is a huge setback in itself, as people’s dreams of social justice seem to be fading away in the light of his economic policy-making  which stresses capitalism and ignores the income structure of Egyptians and their chronic need for better education and healthcare services.

Social justice is only one example of their fading dreams; other dreams of equality and freedom of expression are also being extinguished as Salafi extremists besiege Media Production City, the main hub of TV channels in Egypt, and have discriminated against Copts in several notorious incidents. Such Salafi actions were not stopped or even condemned by Morsy and his government, as they were too busy pushing through the new constitution.

The constitution is not only a setback, but a scar on the forehead of every Egyptian. Initially, during his presidential campaign, Morsy promised to dissolve the constituent assembly responsible for drafting the constitution and form a new one, a truly representative one. However, he did not dissolve the assembly, on the contrary, he granted it impunity against any judicial review!

As a matter of fact, this came as no surprise to me as I have never trusted the Muslim Brotherhood and because they desparately wanted to get the new constitution passed. Why is that? Simply because the constitution contained an article that is decisive for maintaining Brotherhood rule in Egypt. This is the article stating that Islamic provisions are the main source of legislation in Egypt.

But before you jump to any conclusions,  let me add that this article is not decisive because the Muslim Brotherhood wants to implement Shari’a law or Islamic rule, but because it is the only thing guaranteeing Salafi group support for the Brotherhood.

The Brotherhood have recognized that their self-seeking political actions are making them increasingly isolated. Accordingly, they had to secure the support of large groups that are able to mobilize the masses and push them in a certain direction that is deemed “divine”. These groups are identical to the Salafi ones.

2012 is now gone, with all its setbacks and fading dreams. However, I still have faith that those who ousted a former dictator will have the force to oust the current dictatorship.

On 25 January 2013, no one celebrated, as their dreams were not achieved! On 28 January,  two year after the 2011 Friday of anger, our dreams are still the same. We are still striving for human dignity, social justice, bread, and freedom!

Two years have passed, ruling figures have changed, but the game remains the same! The struggle for freedom continues!