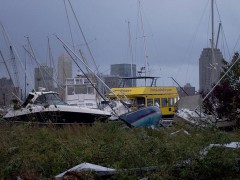 As Hurricane Sandy made landfall in my home state of New Jersey, eight members of my immediate family and myself were huddled in our basement. Power was out and there was no heat. When I went to my room on the second floor to get blankets for my daughter, I could feel the whole house shudder under a particularly strong gust of wind. It was a terrifying night.

But we weren’t alone in our misery.Thousands across the state of New York and New Jersey faced the storm without power or heat. Some didn’t even have hot water. For a couple of days after the storm, there was  such a severe gasoline shortage that it had to be rationed – odd days for odd-number  license plates and even days for even-number plates. New Jersey has ended rationing recently but it’s still going on in New York City and Long Island.

Now I understand that it sounds really shallow for me -an able bodied educated individual living in one of the richest states in the United States of America- to be complaining about a couple of days without heat or power and having to wait in line at  the gas station, when so many people around the world face these realities each and every day. I’m not trying to gain sympathy for what me and my family went through, but I am sure am looking for answers to what happened that day and what should have happened. And I am looking for support for the many residents of my state and the state of New York who are still trapped in what Michael Wilson of The New York Times calls “pockets of misery“. Dig deeper into the mechanics of recovery that follow a natural disaster and you will see that it’s the poor communities and families with limited resources who are the ones that need the most, but end up getting the least. In the Hurricane Sandy scenario in New York City, the rich and the poor faced the disaster differently.

David Rodhe commented in The Atlantic on the glaring economic disparities in the Big Apple and how they came to the fore in the aftermath of Hurricane Sandy,

“Manhattan, the city’s wealthiest and most gentrified borough, is an extreme example. Inequality here rivals parts of sub-Saharan Africa. Last year the wealthiest 20 percent of Manhattan residents made $391,022 a year on average, according to census data. The poorest 20 percent made $9,681.

All told, Manhattan’s richest fifth made 40 times more money than its poorest fifth, up from 38 times in 2010. Only a handful of developing countries – such as Namibia and Sierra Leone – have higher inequality rates.”

The rich were able to plan for the disaster, but the poor – with their resources already strapped –  had very limited choices. They couldn’t flee the city and risk losing their jobs or couldn’t afford to take their families with them; they couldn’t buy provisions for rainy days because they were already on a tight budget – in a way their Hurricane Sandy was very different from the one  economically well-off people faced.

But did the poor get the support they needed, and are they getting the support now – two weeks after the Hurricane? The answer is no, they are not. Following the storm,  the inadequacy of the preparations by the city and state overnment was clear. Even though Mayor Michael Bloomberg worked tirelessly, the gap was exposed.

Wide spread power cuts, long lines for gasoline and then rationing, a public transit mess –  the rich weathered through but the poor paid the price when they could least afford it.

Hurricane Sandy and the freak winter storm that followed, and the host of natural disasters that occurred this year, shows that even rich countries are vulnerable to the effect of climate change and other disasters. It also exposed the strategic vulnerabilities that even countries with advanced disaster management programs have.

The gasoline shortage in the wake of Hurricane Sandy was understood as a national security and supply chain vulnerability; the damage to the  transport system and power grid also exposed serious flaws. After the devastating earthquake in Haiti in 2010, there was an outpouring of support for the victims. Massive loss of life and property  was blamed on Haiti’s economic and political situation. What excuse does a rich country like America have when  it fails to respond to a disaster properly?

It is clear that, rich or poor, the world is vulnerable to disasters -whether natural or manmade – and the rich don’t always get it right.

According to the 2007/2008 United Nations Human Development Report, climate change disasters disproportionately target the poor, and the majority of those affected live in developing countries. Hurricanes Katrina and Sandy, and other disasters have shown that even the rich countries sometimes cannot manage disasters. Add the two together, and we can see that disasters are disproportionately cruel on the poor – even when they reside in a rich country. The best way to respond is to have a sound disaster management strategy – which means one that factors in the economic realities.