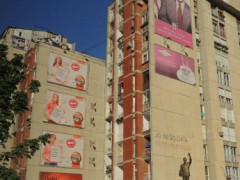 Seven years after it gained independence, the country that numerous Western countries once fought for is now facing an unprecedented exodus of its people. And they might have nowhere to go.

At first, their reasons for leaving do not differ much from a standard answer sheet coming from migrants all over the world. When interviewed by foreign media, such as Besim Aaliti told the Financial Times, or Xhevat Cakaj described to the New York Times, they unanimously fire a universal list of every failing state’s cardinal sins. Shattered economy, poverty, corruption and considerable lack of law enforcement, youth unemployment and religious intolerance – those features, however terrible, are certainly not exclusive to Kosovo. Be that as it may, the case of this former Serbian province, nowadays labelled as partially recognised and still lacking UN membership, is particularly complex, as it stems from two paradoxical geopolitical situations. The first one touches upon the Kosovaars themselves – who seem to share a profound conviction that a country they fought for decades no longer offers them a future. The second, in turn, concerns Kosovo’s place vis a vis other countries – most importantly, EU member states, who once wholeheartedly supported its independence, but now face an enormous burden of migrants illegally crossing their borders in search for that future they know they will not find in Pristina.

The phenomenon of the current Kosovaars’ exodus concerns in fact many of EU countries, even though none of them directly borders Kosovo. Such as Austria, which has witnessed an enormous increase of migrants entering its territory, this year amounting to a total of nearly 550 people per week. Or Hungary – most often the first Schengen stop for Kosovaars, reaching its souther borders after days, sometimes weeks of compassing illegally through Serbia, the middleman country in this human trafficking process. As a matter of fact, Budapest reports a shocking number of nearly 10,000 people monthly attempting to enter the country illegally from Serbia, most of whom are believed to be coming from Pristina. In order to understand the scale of the influx from Kosovo, a rather small nation totalling less than 2 million inhabitants (although reliable demographic figures are very difficult to obtain at present), it is necessary to place its migration figures in a wider context. And this is where the real picture emerges – according to Frontex, an EU border control agency, in December 2014 migrants from Kosovo amounted to 40% of all illegal immigrants entering the EU territory. Such figure comes to a surprise of many European commentators and policy makers, every-so-busy overemphasising the worrying migration balance with Middle East and Maghreb countries.

None of those disillusioned Kosovaars makes, however, the trip to the promised land alone. It is often entire families who depart, leaving behind their homes, their relatives too old to embark on such a journey and, above all, the years of struggle for independence and hopes for an own nation state. They enter the packed, rust bucked buses and roam towards Serbia, though the success of their journey is not all in their own hands. The migration process is highly institutionalised and for some has become nothing else than a profitable enterprise. Professional human traffickers are  nowadays perhaps the most needed professionals in Kosovo. They (claim to) provide complex services, from forging passports and visas to finding shelters and giving assistance in seeking asylum. Sadly, in vast majority of cases not much of the above ever materialises, with smugglers frequently abandoning their customers middle of the road. And their services are no cheap. According to information recently disclosed by the New York Times, a transfer to an EU country of one Kosovar can cost as much as 3,000 euros, while the price for entire families reaching between 7,000 and 10,000 euros.

And sadly, even despite the enormous financial costs, there are few and far between Kosovaars who reject this type of help in leaving their country. Mostly because they simply have no other choice. Unlike migrants from other non-EU countries (such as Ukraine), citizens of Kosovo do not have access to European visa programmes, contributing to their sense of isolation and self-perception as the continent’s forgotten corner. Their situation does not improve much once they reach the EU borders. In most of the countries they target, it is only possible to successfully seek asylum if there is a significant threat of being persecuted in the country of origin. And this criterion, even if exists, results nearly impossible to prove in Kosovo – a land torn primarily by economic shortcomings and corruption, rather than open military conflicts. As a result, Kosovaars hardly ever manage to escape the illegal immigrant status, failing to pass through the asylum procedure. This is painfully reflected by figures concerning such proceedings. Only in 2014 in Germany as much as 99% of asylum applications tabled by Kosovaars were rejected, while the acceptance rate in 2015 stands at merely 0,3% – and those proportions are pretty much representative of the entire EU.

And thus the vicious circle of Kosovo’s population exodus is closed in a double paradox. Only seven years after the long, oftentimes bloody struggle for its independence has been successfully concluded, Kosovo is facing a demographic crisis much more detrimental in consequences than any of the wars it ever fought. And its previous allies, no long ago giving their arms and diplomatic declarations in defence of Pristina now perceive it as nothing else than a huge burden causing social unrest and discontent among its own citizens. And so is Kosovo becoming a land that is emptying out, a land on none’s responsibility – and sadly, of none’s future either.

Mateusz Mazzini is a Polish-Italian freelance journalist and political analyst. He is a graduate of St Antony's College, University of Oxford, where he read for Master of Science in Latin American Studies. Mateusz previously studied at Aberystwyth University, Universidad de Córdba and Basque Country University in Spain, having also lived in 5 other countries. Currently he cooperates with the biggest Polish daily papers and POLITYKA INSIGHT - Poland's leading think tank. In both his academic research and journalistic commitments, he compromises Latin America and Central and Eastern Europe, covering issues from both these parts of the world.