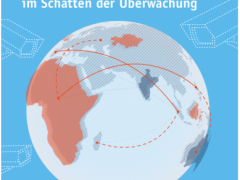 The debate magazine “Internet, Democracy, Trade – Globalization under the Shadow of Surveillance” produced by the Internet & Society Collaboratory (CoLab) in cooperation with FutureChallenges.org and newthinking is now available on newsstands everywhere (Price: €6).

tead of the usual final report, CoLab is pioneering a debate magazine format to broadcast the results of the 9th “Globalization and Internet” initiative. People taking part in the initiative present their views on key issues of globalization and the Internet and on the upcoming transatlantic free-trade agreement (TTIP) between the EU and the USA. They give answers to such crucial questions as: How does the Internet relate to the national state, and what new borders are now being created in the Net despite globalization? What impact will the transatlantic free-trade agreement have on ecology, consumer protection and culture, and how can greater transparency and participation by civil society be achieved?

Please note that this publication is only available in German. In the coming weeks we’ll be gradually publishing articles from the magazine on our website under a free CC license so it’s well worth your while to drop by. The magazine presenting the final results of the 9th initiative will be companioned by a separate special issue in English on the TTIP which should appear in mid- December.

The debate magazine on “Internet, Democracy, Trade – Globalization under the Shadow of Surveillance” will also be presented on 11 December at CoLAB’s BASE_camp winter get-together of network activists.