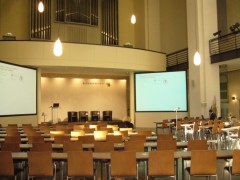 The venue of the fc_org barcamp on “How the internet changes our reality?” was a more than 100 year old church now transformed into an event location. This impressive building symbolizes the theme of the barcamp and the spirit of our time quite well: The internet – a medium for free flow of information and the base of 21st century communication definitely has changed the reality of communication while the old church now used as an event location mirrors how reality has changed as it has moved from being a space for religious practice to a space for discussion and exchange, from  a place for one offline community or congregation to a place for many online communities.

Communicating, sharing, and engaging in dialogue: these values lie at the core of the “barcamp” format. The 140 participants made up a genuinely heterogeneous group of people: from neuroscientists to filmmakers, from consultants, students, and designers to lawyers and political scientists.  – a colourful mixture of people which promised well for the controversial discussions which followed.

Different barcamp sessions covered various fields. More concrete topics such as presentation of concepts for a digital Member of the European Parliament (MEP), for enabling participation or for decentralized payment systems to reform our economic system were contrasted by sessions with a more philosophical and theoretical approach such as the one on the Internet and democracy.

In some sessions the first half hour was taken with finding a common basis of understanding among the participants. Yet this “waste” of time paid dividends in terms of the willingness of different mindsets to engage in dialogue. Some of the people I talked to were taking part in a barcamp for the first time and very much welcomed this new “way of doing a conference”. The usual problems of interdisciplinary research and discussion groups “not understanding each other” also popped up here and there. People seemed to have a common understanding of visualizations though – the transfer of a message is sometimes easier when done by pictures than by the spoken word. The Institute for Internet and Society , a partner of the event, showed some very catchy diagrams to explain different internet-related concepts such as internet governance, open science and the policy implications  of the future internet. These offline relics were highly appreciated by the participants.

I believe that we constantly have to remind ourselves that our understanding of the internet and what it means for our version of reality is not shared in  every corner of the world.

Although possible in theory – the internet unfortunately cannot change  reality for all people in the world to the same extent. This was confirmed when I talked to Kevin Fernandez, a Berlin-based Malaysian Ph.D. student about socio-political blogging (@kevinfernandez, his blog). For him the internet represents the only channel around where he can present his opinions about the political system in Malaysia – naturally under a pseudonym.

He told me that if he criticized the Malayan political system under his real name he could not finish his PH.D. in Germany. For him the internet is an important means for presenting his opinions and it also plays a crucial role for him when it comes to political activism. In Germany “we are still too well off economically” to really make use of the internet to change our reality. I totally agree with this opinion from one of the participants.

How will the  future of the internet change your own reality? Draw your own picture…..