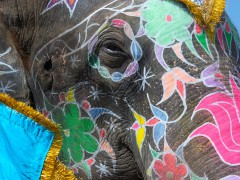 In India, true sustainable governance can only come from an informed and educated electorate, reports FutureChallenges blogger Ajinkya Pawar.

Elephant in Motion. Published by Kevin Jones on Flickr (CC BY 2.0).

The largest democracy in the world navigates through a billion voices, a million communities and as many interest groups. Assailed from all sides by multitude of forces, the apparatus of the Indian government seems from the outside chaotic, opaque and unintelligible. If the Indian democracy was a machine, it would have had a million parts that do not fit well together, make a lot of noise and do not do much.

However, India is also a beacon of hope for many overpopulated countries in South Asia. Its support of the Dalai Lama is causing China much heart burn. Refugees from Bangladesh, Sri Lanka, Tibet, Nepal and Afghanistan find a new home here.

Yet, the promise of ‘equal opportunities’ that Indian democracy is not always fulfilled in reality. As SGI’s BRICS report about India points out, social policies in India for the most part fail to prevent societal exclusion effectively, and do not ensure equal opportunities. The thriving and richly vociferous media sector and the competent and sometimes proactive judiciary – though terribly overburdened – have notably taken efforts to counter this inequality.

Indian governance behaves like pollen grain in water, the random movements of which the Scottish biologist Robert Brown first observed and was puzzled by. No one ever knows exactly in which direction the country is being hurtled by the government. The seemingly random Brownian motion of the Indian elephant causes confusion and distrust among its citizens towards the government, but at the same time they are certain that it will not make any fast movements. We don’t trust our government when it assures us that nuclear energy is safe, or that it will compensate people justly for land acquisition. However, we aren’t alarmed enough to support consistently, for example, the social activist Anna Hazare and his movement against corruption, when they demand instituting an independent ombudsman to whom the Prime Minister as well as the legislative and executive organs are answerable to.

The existence of so many stakeholders has created a compromise driven style of decision making where consensus rarely accrues. The hallmark of a typical legislative assembly session in India is the adjournment. Some of the bills that are seeking ratification are as old as the country itself, which is in turn younger than most politicians of the country.

The young and the upwardly mobile urban citizens are among the least visible faces on the poll days, while actors in governance are absent from digital realm where the young are present. It seems like disparate worlds which the country’s future and present inhabit.

Democracy in India is also challenged by the system of funding of electoral campaigns and political candidates. In order to compete successfully in elections, candidates often need to finance their campaigns themselves. Thus, it is often only the rich who can afford to stand for elections. This propagates an oligarchic power structure with few people consolidating their power in legislative and as economic spheres.

When it comes to environmental issues powerful interest groups are usurping national resources. This is endangering the livelihood of indigenous populations and millions of other people whose survival depends on a symbiotic relationship with the environment. As the SGI report points out, environmental policy insufficiently protects and preserves the sustainability of natural resources and the quality of the environment.

What is the Right Path of Development?

The debate about which path of development India should take is diverse – and these discussions need a voice in governance: Is urbanization really beneficial? Can India sustain its growth on the back of continuous flow of cheap labor from the East of the country to the West? Or should careers and education avenues be created equitably throughout India? As inflation hurts harder than ever, do we need to rethink subsidies and agricultural policies? Can science be employed to augment farmers’ outputs further and reduce the uncertainty in the yield of land? Can technology be employed for ensuring equitable employment and education opportunities? Can ‘Aadhar’ cards (the unique identification card which aims to make welfare services effective) be used further to allow for a truly participative decision making process through global referendums?

Unfortunately, not many efforts seem to be undertaken to answer these important questions. As the SGI report points out, only 0.8 per cent of India’s GDP goes into research and development, of which 60 per cent is earmarked for space and nuclear research. Where’s the empathy in sciences? It’s as if science is an instrument of national jingoism and nothing else.

And the apathy affects the educational infrastructure, too. India has created islands of excellence, while for the majority in the country educational excellence is only a dream. While the right to education might provide a fillip to increase basic access to schooling, the quality of education remains a moot point. Whoever can afford private education, opts for it. The supply never meets the demand.

True sustainable governance in India can only come from an informed and educated electorate which is engaged and aware. India must have clarity and will power to execute the governments Five Year Plan which accords a high priority to investment in science and technology to provide quality education to the billions of its citizens.