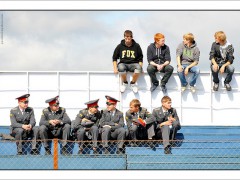 This article is part of a cooperation between Future Challenges and the Sustainable Governance Indicators (SGI). SGI’s new study “Change Ahead? Sustainable Governance in the BRICS” examines policy making in Brazil, Russia, India, China and South Africa. We’ve asked five of our bloggers to tell us what they think about the reports.

On environmental issues, cyberactivists in Russia are filling the void of state indifference and failure. Russian civil society is getting stronger, writes FutureChallenges blogger Masha Egupova.

Youth and state in Russia: Visitors at a rap festival in Moscow. Published by Mad Wraith on Flickr, CC BY-SA 2.0.

It is not a secret that Russia is not really a democracy, rather a state run by the authoritarian regime of Vladimir Putin and his “stability” course. Many laws, including the media law and the constitution, have good provisions protecting human rights and individual liberties. The problem lies in the fact that there is no supervision of the implementation of these laws. And there is also no real separation of powers in Russia either. A good example is the judicial system: In certain political cases the decisions of the courts do not rely on the rule of law but on orders from the Kremlin or local authorities. Meanwhile, the majority of the trials ends up with a conviction.

It is, thus, very doubtful if Russia is on a good path to a sustainable development with respect to governance and public policy. The BRICS study of SGI confirms this by stating that “Russia has constructed an ‘outer shell’ of democratic institutions, but has failed to fill it with substance, as the reality of political pluralism and policy deliberation has deteriorated in recent years.” Among others, the report refers to weak law enforcement mechanisms, falling levels of education and growing corruption as serious shortcomings in Russia. I couldn’t agree more.

These and other issues also create a lot of obstacles for foreign investment. However, I believe these findings do not surprise anyone any longer. It is something to be expected from Russia.

Even though the situation might seem rather depressing, there are reasons to have hope for the future: It seems that Russian civil society has finally awakened and is taking actions. I am a cyber-optimist and I believe that civil society in Russia is growing and getting stronger with the help of the new technologies and the internet.

While the state in Russia remains indifferent to various issues, civil society offers solutions which the government does not. For example, the state does not pay much attention to environmental issues and does not encourage the implementation of eco-friendly solutions. I agree here with the finding ofSGI’s BRICS study that “environmental policy has largely failed to protect and preserve the sustainability of natural resources and the quality of the environment”.

The new growing civic force is often able to improve the situation on the micro level. Blogger Against the Litter [rus] is one of the initiatives that unite bloggers across the country in their attempt to clean up public spaces. An outbreak of wildfires in 2011 brought people together when the government was mainly unable to stop the disaster. Several internet activists created a “Help-Map” (http://russian-fires.ru/) that was able to mobilize people, direct them to the closest location that needed help and provide assistance to the victims. It was one of the first successful examples of internet mobilization in Russia.

The same scenario occurred in July during the disastrous floods in Krymsk near the Black Sea when Russian authorities were unable to respond quickly to the warnings about the disaster, rescue people and help them. Thousands of volunteers helped in gathering aid and going to Krymsk. However, Russian authorities do not seem to favor such enthusiasm and as a response the parliament approved a law regulating voluntary services that puts substantial limitations on volunteers.

Moreover, it seems that the Kremlin is trying to further divide the Russian society on religious, socio-economic and ethnic lines: Orthodox Christians are placed against the iPad generation, migrants against the local population, and liberals against each other, to name just a few. The recent trial against the three singers from the punk band Pussy Riot showed that the society is polarized along religious lines and people are more interested in exposing each other rather than uniting against the unfair and corrupt government.

Even though the majority of the population voted for Mr. Putin in the past presidential elections, the Russian middle class is growing. The majority of the adult population in Russia is using the internet on a daily basis; the older generation is also drawn into this process. These people stopped watching TV long time ago and are getting all their information online. While the elderly generation in the small towns and the countryside keeps voting for Mr. Putin and his “stability” course, the oppositional layer of the society tries to highlight the corrupt nature of the regime.

The BRICS study outlines two possible scenarios for Russia: a positive and a negative one. It is clear that Russian authorities are not flexible and irresponsive to the social demands. So why would they change now? Both Mr. Putin and the current Prime Minister Dmitry Medvedev consider corruption the most dangerous disease of the state machine, yet almost nothing has been done to eradicate it. Russian authorities will follow in the same style. They will keep tightening the screws until the society explodes. Russian society reminds me of a brown bear during hibernation: It can endure abuse for a long time, until at some point he’ll get extremely angry. And then, enough will be enough.