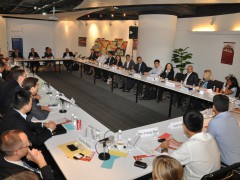 The last day of the Forum on 1 November (here is a blogpost about the first day and here is a post that covers the second day) started with an air of finality in the search for solutions as  various speakers discussed the effects of aspects ranging from cross-border migration and urbanization to depopulation.

One speaker stressed how primary workers moving with their families and international migration affected demographic change and cited these as the main sources of such change. Statistically 36% of Asians migrate in comparison to 33% of Europeans and a mere 17% of Americans. It also emerged that South-South migration is now as common as South-North migration which was the main driver of global migration from 1990 – 2010.

Participants in discussion at the Forum

The emergence of  India and China as growing economies has boosted their need for migrants. In 2010, for the first time,  South-South migration crept ahead of South-North migration. As economic power shifts, its effects on traditional patterns of migration have started to be felt. The global financial crisis has caused the general population contemplating migration to take a new look at the opportunity – in view of the fact that the traditionally strong economies of the West have declined while the economies of India and China have remained relatively unaffected. Change in population demographics has been driven by a youth bulge in the growing economies of China and India coupled with an increasingly ageing population in traditional powerhouse economies. This has caused a shift in the labour needs of economies. At the same time, the huge population surplus in rapid growth economies coupled with rapid economic development has caused major migration and rapid urbanization as they changed from being agrarian to rapidly developing industrial societies. Lack of job opportunities in a larger population is seen as one tool driving this change.

There was also discussion on expected migration trends in Europe and Asia. As work equality has emerged over the past few decades in the traditionally stronger economies, so has their focus on education shifted. Ordinary people do not feel they must be highly educated in order to sustain a relatively affluent lifestyle. This has led to a drop in education standards in these countries which has created a need for higher educated migrants. To give one example, in Germany 35% of immigrants are Asian. This is also evidenced by positive terms like “additions to country people”, “people contributing to the economy” and “new people” which are how migrants are referred to in America these days.

Another speaker highlighted that the rapid pace of demographic change has also given rise to important challenges. The negative publicity given to migrants and negative political perceptions of migration are also in drastic need of change. Misconceptions and anxieties are rife in local populations and include such views as: migrants are a burden on medical funds; many migrants do not pay taxes;  and all they are want is citizenship for themselves and their children, making it more difficult for locals to find jobs and obtain more benefits. Such misconceptions are used by unscrupulous politicians for their own nefarious ends.

The fact is that migration is driven not just by the needs of individuals but by the needs of economies too. Thus it is simply not true when people complain of lack of job opportunity: if a local wanted a similar job to a migrant, he would in fact be able to find one and would actually be preferred for his intrinsic local knowledge. However, welfare systems have opened themselves up to abuse and coupled with the lower level of education, this has created a need for migrants. We should also look at migration and governance issues. Migrants can be refugees or illegal immigrants, blue card holders or labour migrants. The need to look at refugees, illegal migrants and legal migrants should be dealt with as a number of separate issues rather than being clubbed together as a single issue.

This gave rise to a discussion on what the appropriate policies for managing migration might be. The need to integrate migrants was highlighted. Having two distinct sets within the workforce, each  suspicious of the other is not to the benefit of any economy – whatever political advantage might be gained from having them kept as separate units.

It was also felt that the business side of migration needs to be disconnected.

Countries’ perceptions about migrants were also questioned. People agreed that home countries were labouring under a misconception if they felt that all their citizens would love to migrate; and that the wariness and apprehension shown by the host countries in welcoming migrants, based on false perceptions of differences in terms of values, culture and skills, also should be challenged. Understanding and co-operation between nations can only be of mutual benefit: to the home country in terms of repatriation, and to the host countries in terms of an eager work force to increase their standing in the global marketplace. Accordingly, politicians need to interact at more levels.   As political systems take cognizance of this and become more transparent, it is bound to be of great help to the global economy.

The challenge is encouraging the type of migration wanted. Creating a natural migration policy through personal contacts via community services could prove quite effective. Political perceptions, transmitted to the general population viewing migrants as a valuable addition to the economy are also essential to this goal.

Discussion on challenges and solutions of demographic change

A lively debate on useful measures to enhance employability in India was started by the speakers.

One speaker pointed out that the creation of an employment and skills market through appropriate training is essential as it would broaden the horizons for where a person could be employable even without the necessary education and skills which are the only parameters of employability at present. Many industrial companies face the problem of the lack of skilled labour and that can be tackled through training in technical skills. Semi-skilled workers remain in the same jobs as there is no support for them. Class differences are very strong in India and most unskilled workers enter the job market at an early age. Large sectors absorb a lot of these workers but they are neither trained nor are there any development programmes for them. Through proper financial management these workers can be trained and become highly skilled at their work, ensuring the growth of both the individual and the industry itself through greater productivity.

Another speaker felt bridging the gap between skilled and unskilled workers can be achieved through on-site training. He felt that this was being done. The previous speaker objected vehemently to this and felt that the unskilled worker remains unskilled even after years of labour while his children continue in the same vein. He felt incentives, that transcended mindsets and made skills an aspiration, were needed to bring about change, but there were still challenges in aspects like quality, quantity and costs.

In short, the challenge in India is about changing  the mindset of both government and industry to match employment aspirations and bring about greater economic development.

Future security systems in Europe and Asia were then examined and their challenges identified. Politically, the euro crisis is a major challenge. Populations are living longer and also have extended working lives. Social nets for ageing societies, and health insurance and pension systems for emerging ones are needed. Unstable social security systems, underfunded pension schemes, slow government mobility and competitive job markets are further challenges.

Finally, several important challenges of demographic change were identified by the group. Group solutions to these challenges will be discussed with the German Minister of Technology, and eventually their conclusions can be presented at the 13th Asia Pacific Conference in Gurgaon, Delhi. The challenges identifed are:

The  most important solutions identified for some of the above challenges are:

Some participants called it the Gurgaon Initiative and even suggested the creation of a closed group on Linkedin as the way forward.

The talks and discussions are now concluded. Now is the time for action!!!!!