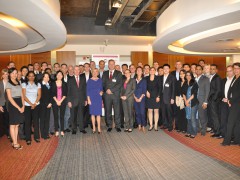 “One can be a senior leader at a very young age and a young leader at an advanced age.…so age is not a determining factor for participating in such a Forum”

Indeed,  the above Forum on Demographic Change, Economic Growth and Social Inclusion, organized  to see how politics and business can jointly address the challenges of demographic change facing Asia and Europe had a  multicultural group of  32 dynamic young and senior personalities from government, academia, media, international organizations and businesses. Most of them were from political and business institutes. They haled from a variety of countries including the Philippines, Thailand, China, Korea, Japan, Vietnam, Singapore, India, Bhutan, Bangladesh, Germany, Sweden, France, Great Britain and the United States.

Enthusiasm was rife among all participants but one could sense it even more keenly in some of the very young delegates who were visibly proud to take part in such a forum and relished being called leaders despite their tender years!

Held in Gurgaon, Delhi, India from 30 October to 1 November, 2012, the Forum was co-hosted by the Bertelsmann Foundation, Germany, the Asia-Pacific Committee of German Business (APA)  in cooperation with the  Observer Research Foundation (New Delhi, India), the Indo-German Chamber of Commerce (Mumbai) and the Landesbank Baden Württemberg (Stuttgart).

The objectives of the forum are:

The solutions are to be to discussed with the German Minister for Technology and Communications and  the conclusions presented in the Asia Pacific Conference in the subsequent days in Gurgaon, Delhi.

The participants gave various reasons for participation such as wanting to learn, share and shape a future of social justice as they would like to see it, to make social transformation possible. Some  of them want to know the similarities and differences of the challenges faced by both Asia and Europe, and how each region can learn from the other. Others want to contribute to tackling these challenges as individuals. Many want to take back what they learn and apply it to their organizations where they are  already working on sustainability and demographic change. Getting inspired by the mutual sharing of  experience, meeting new people and networking were  also suggested by some participants. Germans living in Asia and Asians living in Germany want to learn from each other and put what they learn into practice. Participants also want to find out more on economic growth and measures; and policies for sustainable and practical social inclusion, from each region. Finally, they also want to discuss challenges and solutions on a common platform  in a transparent manner.

The Participants at The Forum in Gurgaon, Delhi, India

Demographic change in Asia and Europe and some of  the challenges facing demographic change  in both regions was discussed. Demographic change was seen as being  the root of many problems although trends are different in the two regions. Societies in Europe are changing as the workforce shrinks. Costs for environmental measures and  healthcare are on  the rise while the older population expands and prospects for further economic growth become bleak.  By 2050 the overall growth rate in Europe will be halved. Similarly in many Asian countries the population is rapidly growing while natural resources dwindle and education systems struggle to cope with the population explosion. Asian infrastructure and Asian mega-cities are collapsing. It’s high time that Asia looks at opportunities to capitalize on its demographic dividend and Europe embarks on a course of sustainable economic growth. The world population now approaching the 10 billion mark  is challenging enough! Although population increase might not be a problem in itself, its consequences in terms of migration, depleted resources, the stress of an aging society and domestic problems all result in  complex challenges of demographic change which  confront Asia and Europe alike. A mutual understanding of the political problems facing the West and the East is necessary.

While some of the challenges are similar, others are very different. Just as globally, times have changed in Asia too especially in India. The advent of new technology  has given rise to  an aspirational and demanding young population on the move. From the revolution of mobile phones, to electronic banking, information retrieval is instant and online. Improved technology has led to India becoming one  of the emerging economies of the world. People are speaking in multiple voices and also hearing them in a world no longer constrained by nationality and geography. In addition to the emerging economies and the global shift of power, there is the rise of multiple minorities who are defined by multiple identities – ethnic, religious regional, ideological, caste, class and  creed. In India there is another population of over 300 million people on top of the youth bulge (roughly 45% of India’s population is under 20). So the challenge  is, the population shift from rural areas to the cities with the rising middle class. The shift to urban areas puts a strain on resources. India has more young people, so  there is  a low dependency rate and this is a time the country has high growth and high investments.

An example of social inclusion, the Aadhar Card or Unique Identification Authority (UIDAI) of India was shared by one of the particiapants. The  Aadhaar Card is a clear example of how politics and business can be used to improve people’s lives. It gives every Indian a  random 12 digit unique digital identity. Nobody can have more than one identity as it’s coupled with a biometric signature. This helps  people – especially the uneducated, to get an online identity as many of them do not have any other form of identity like a birth certificate or school leaving certificate. This unique identity can be used for anything from getting a cooking gas connection, cash transfers, building credit, skills registry, or registration for employment to filling in electronic KYC (Know Your Customer) forms which help to access public services like opening an instant bank account or  getting instant insurance policies. So far there are 210 million Aadhaar numbers. It is seen as a ticket to the future and is especially beneficial for migrants and people living outside their homes as it enables person to person money transfers from mobile phones. It increases financial access for those without an identity. From the Government’s point of view it has complete audit ability and  improves auditing of Government expenditure. Essentially it takes a public social welfare system and modernizes it with technology.

The  first day of the Forum certainly got off to a great start and  highligted  the need to search for new unconventional solutions for demographic change, economic growth and social inclusion!