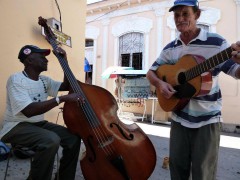 Key changes may be on the way in Cuba. Can the US follow the music? (Photo by G. Apolinar, All Rights Reserved)

The United States’ embargo against Cuba is like the war on drugs – everyone in Washington realizes the policy is shortsighted and ineffective, yet nobody steps forward to change it.

The Soviets appear increasingly unlikely to use Cuba as a conduit to spread international communism throughout the Americas. Anyone worth their salt on the Hill, from the State Department, or the Treasury will privately admit as much. Yet the policy remains firmly entrenched. The same Hill staffer that admits the anachronistic fallacy underlying the Cold War campaign will simply shrug it off as an inevitable fact of life: death, taxes, and the embargo on Cuba.

The US stubbornly sticks to a bad policy because it is good politics. Yes, the War on Drugs is counterproductive, but as long as “tough-on-drugs” continues to poll well, the electoral reward for reform seems scant. Similarly, anything but the hardest line on Cuba could cost either party Florida and, in turn, a national election.

This is unfortunate. Winds of change are stirring in Cuba, yet the US’s stubbornness, embodied in the 1996 Helms-Burton act, could lead Uncle Sam to blow the opportunity.

On Sunday, February 24, President of the Council of State of Cuba and de facto head of state Raúl Castro announced that he would surrender power in 2018. He also appointed 52-year old Miguel Diaz-Canel as first vice president, implying that a man who had yet to be born when Fidel Castro took Havana would be Cuba’s next leader.

The exit of Raúl, the emergence of a younger, less ideological generation of leaders, and the incessant, if slow transition to a market economy combine to create an opportunity for the US to normalize relations with the Caribbean island. In fact, such normalization would reinforce all three trends.

Little is immediately clear about Vice President Diaz-Canel. We understand that he was a heartthrob in the 1980s, that he rides his bike to work, and that he listens to The Beatles. We know Raúl Castro has praised his “ideological firmness” and that he has served in the Cuban military – two facts that have raised red flags for hardliners in Miami.

Yet compelling indicators suggest that Diaz-Canel is more than a party hack, and that he will continue Raúl’s progress towards economic liberalization. Diaz-Canel has distinguished himself for his pragmatism. He is believed to have played a key role in facilitating foreign investment in Cuban hotels. As Minister of Higher Education, he gained the respect of his peers by listening and probing, rather than dictating. The ascension of Diaz-Canel represents a break from the geriatric revolutionary leaders – a break that was likely a precondition for any serious modernization.

For the first time since 1959, a Cuban leader will be younger than the revolution (Photo: G. Apolinar, All Rights Reserved)

Moreover, Diaz-Canel would struggle to hold a hard line even if he wanted to.

Raúl’s reforms have been slow and halting, but they have also been irreversible. The Economist reports that “much of Cuban farming” has been privatized and that, by 2015, one-third of the workforce will be in the private sector. With cars, computers and phones already traded, the momentum of commercialization – the allure of possession – will be difficult to stymie. The Castros’ success in containing reform momentum owes much to personal allegiance and veneration. Diaz-Canel will command no such respect.

Castro’s exit opens a window of opportunity for the United States. But US obstinacy, embodied by the Helms-Burton Act, threatens to pull the curtains on this window. The Helms-Burton Act, passed by the US congress in 1996, requires a series of stringent reforms (including the abolishment of the Cuban Ministry of the Interior, the issuance of private media permits and a new, democratically elected government within 18 months) that must be addressed before the embargo can be lifted. Such reforms have not been required of other American partners, including China, Saudi Arabia, and Vietnam.

The Helms-Burton Act can already be implicated in one missed opportunity. The fall of the Soviet Union in 1991 pulled the rug out from under the Cuban economy, and Fidel Castro was forced to slowly implement market-based reform. Rather than encouraging these reforms, the US congress enacted a series of draconian laws, culminating in the Helms-Burton act, all geared towards further isolating Castro and spiking the final nail into the regime’s coffin. Instead of facilitating Cuban reform, the US left Castro exposed only until a new sugar daddy emerged in the form of Hugo Chávez in 1999.

The standards of Helms-Burton remain unrealistic, and observing the act would force the US to impede and frustrate a transition that was always going to be difficult.

Helms-Burton may have already cost Washington one opportunity – will it stifle another? (Photo by Author)

In the near term, Cuba’s most important relation may not be with the United States, but with Venezuela. Venezuela provides the energy-starved island with over 100,000 discounted barrels of oil per day, saving Cuba US$3.5 billion annually (5.75 percent of 2008 GDP). This support has enabled the Castros to prolong their regime for an additional fifteen years. With an economy under intensifying duress, Venezuela will be hard-pressed to continue such largess, which could well be curtailed by the time that Diaz-Canel assumes office.

Yet, if Helms-Burton precludes the US from filling any void left by Venezuela, it is entirely possible that someone else will. China, for example, is intrigued by the potential of Cuban off-shore oil, and has been known to finance projects in the Caribbean of far less net-present-value. Beijing could easily intervene on Havana’s behalf, and any financial support would not be contingent upon political reform.

And a repressive regime could live on.

Senator Jesse Alexander Helms (R – North Carolina) spearheaded the eponymous Helms-Burton Act, but this was not his only initiative over three decades as an American politician. Early in his career Mr. Helms worked tirelessly to ensure the survival of racial segregation. As a senator he battled against Civil Rights before leading a 16-day filibusterto prevent the Senate from approving a federal holiday honoring Martin Luther King, Jr.

Soon Cuban policy will no longer be dictated by 1960s revolutionaries. Perhaps US policy should no longer be composed by cold warriors either.

Cuba’s transition will not be easy, it will not happen overnight, and the process will be fraught with errors. However, the island’s modernization will enjoy exponentially improved odds of success if it can count on the United States as a friend, mentor and benefactor.

Daiz-Canel may be ideologically firm, but he does not stand a chance against Beyoncé.

Time to start thinking about the future, and not in the past (Photo by Author, Caribbean Sea)

The Pacific Pumas
The Ghost of Artemio Cruz
Still on the Brink: Seven Things We Know About Venezuela