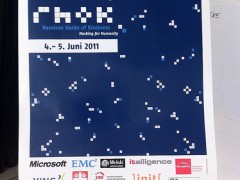 Impressions from the RHOK #3 event in Berlin

“This changes everything. Again” says the commercial for a device that is omnipresent at betahaus in Berlin, and particularly on the weekend of June 4th. About fifty people from eleven countries have come to spend two days ‘hacking for humanity’, as the slogan of the “Random Hacks of Kindness” (RHOK) community reads. The project was founded in 2009 in partnership between Google, Microsoft, Yahoo!, NASA and the World Bank in an effort to produce practical open source solutions to development problems. Regularly organized events usually only mark the starting point to developing technology solutions, while the development continues far beyond these events.

What it has really changed

The people who participate are traditionally met with certain prejudices: computer nerds, geeks wearing glasses and inside-joke t-shirts, who stare at bright screens in dark rooms all day and who don’t have much of a social life. And a first-timer like me honestly doesn’t know what and whom to expect at one of those hackathons. As expected indeed, they all brought their smartphones—the devices that have changed all of our lives and that are doing a great deal of ridding the participants of their traditional geek image: they are finally building a bridge between people and computer technology, closing a gap that has existed for as long as the computer itself. Microsoft delivered the first pillar of this bridge with Windows, providing an interface that allows people to interact with technology, on a mass scale. But the avalanche broke loose in 2007, when Apple introduced the iPhone. All of a sudden, technology lands in our pockets and we use it wherever we are, around the clock, and most of all – thanks to Apple’s marketing brilliance – it is super cool.

The real change is more deeply rooted, however. It represents a paradigm shift in the relationship between man and machine. I argue that until the advent of the smartphone – or more precisely: smartphone applications -, this relationship was artificial: we had to learn computer technology and adapt to it, hence the use of it was a new aspect, an add-on, to our lives. Computer technology and the internet were already part of our daily lives, but they were fenced off in clumsy grey boxes which stood in the study or the computer room of our homes and we had to make an effort to go to that room, switch on the box and use the technology for the sake of using technology. If there was no need to use technology, it was meaningless and invisible once the doors to these rooms were shut.

Social Media and the smartphone have changed the rules of the game. They have turned the relationship from artificial to natural. Man does not follow machine anymore, machine follows man (and woman, of course). Technology has been integrated into our lives: rather than being its own separate aspect, it has become part of every other aspect. It has been broken down into little helpers that surround us and make our lives easier. Differently put: what was entirely virtual back then is now part of reality. Think of anything you do anytime during the day—there’s an app for that. And those who develop this technology are becoming integrated as well. They are not the geeks anymore whose only trait is this technology approach of life; they are becoming helpers, hipsters, heroes in all aspects. They brought us Facebook, making everyone a socialite, Instagram, making everyone a photographer, and Ushahidi, making everyone a helper in crisis situations.

And precisely those are the people I stumbled into at RHOK Berlin: helpers, heroes and hipsters. Helpers like Raul Krauthausen and his team from Sozialhelden, who built wheelmap.org which tells people with disabilities whether the places they want to go to are accessible for them. Heroes like Shoaib Burq and his team, who developed a disaster relief mapping app for Caritas Germany during the last RHOK event in Berlin. The app was used by the Caritas teams in the aftermath of the earthquake in Japan, making humanitarian aid efforts better coordinated and hence more effective. To me, what makes all of them hipsters (i.e. really cool people) is that they are dedicating extraordinary amounts of time to developing these tools entirely for free (and to be complete: to win some nice gadgets at the end of the weekend). They believe in the idea of utilizing their skills for the sake of humanity and, working together in ad-hoc teams, in less than two days they create functioning solutions to urgent problems. Likewise, they follow their own ethic: whatever is developed at RHOK must be made available and documented as open source on the web, allowing everyone to make use of it and contribute to the further development. The benefits? “In the precious first hours after the earthquake in Haiti, it took the global community not even two hours to fully translate open source mapping and SMS help services for victims into French and Creole,” Anke Domscheit-Berg, who organizes the RHOK Berlin events together with Shamim Rafat, says.

Does it really change everything?

Not really. As a matter of fact, now that the technology is well integrated into our lives, we can live the way we used to live, only more efficiently. Rather than Life 2.0, I would call it a 1.1 version. This is the answer I give in discussions with Facebook and smartphone refusers: yes, everything is possible without them; but with them, everything is more efficient. Sure, I don’t have 300+ friends in real life. But the truth is, my friendships stay much more vital than I would ever be able to maintain without Facebook. The Arab Spring movements, as was already discussed here, and most recently here, were not twitter revolutions. They were revolutions as there have been many in history: by the people, who stood up against unbearable social, political and economic conditions. But the Internet and social media contributed in two ways: first, they helped people realize their misery by making information from outside their countries more easily available; second, they helped people organize their demands and their protests. We will never find out, but to claim that the Arab Spring would not have been successful without social media is not completely unrealistic. And while we are not yet able to tell what will happen to Syria, twitter does give a realtime insight to how the situation is developing, leading to raised awareness and increased public pressure on our governments to react to the cruelties.

At the same time, we are witnessing the small country of Iceland involving its citizens directly in the process of drafting a new constitution for the country through social media. Again, this is not completely new: the country has the oldest documented parliament in the world and a tradition of inclusive democracy. But it makes complete sense that this same country now fully integrates social media tools in its political arena. More democracy is not possible.

What really has to change

Most importantly, those who are hesitant to open up towards openness have to change: open source, open data, open government should be embraced. While the governments in the United States and in the United Kingdom were among the first to make data public, continental Europe traditionally opens up more slowly to such innovation. In most departments of the German state administration, there is not even a position dedicated to social media or open data. “It comes down to being lucky enough to find a web enthusiast in the right position in order to discuss open government possibilities,” Domscheit-Berg notes.

At RHOK, the Berlin Senate of the Interior opened up and asked for help. In return, it received an application which reduces the reaction time of disaster response teams by streamlining their coordination via SMS – for free. On the other hand, an application that would help people with impediments orientate themselves better on the public transport system was not developed, because the needed real-time data was not provided by the company that owns it.

Openness contains much more opportunity than risk. It generates transparency and democratic participation; it allows for better scientific analysis and research; it unites people across borders; and it allows finding global solutions to global problems, together.

Coming back to the developers, something else is changing. A new form of symbiosis between those who want to tackle future challenges and those who build technology is evolving and I encourage everyone to embrace it. I myself participated in RHOK neither as a developer nor as a designer, but as someone who is focused on conceptualizing solutions to these challenges, and the developers convinced me very quickly that in this role, my participation is equally important as theirs. The closer the applications are becoming integrated into our lives, the wider the range of people who might have a world-changing idea will grow (because, I admit it, there is not yet an app for everything). In fact, all developers I know have told me I should not get a degree in computer sciences because my skills are important for everything except coding.

At RHOK Berlin, six applications that all tackle social, humanitarian and disaster response challenges were developed in only two days. Just like that. So if you want to tackle future challenges, embrace technology and embrace openness because it will make your solution better. Don’t have a degree in web development? Go to a RHOK hackathon and hug a coder. Don’t worry, you don’t need an app for that.