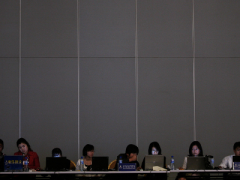 This article is part of a cooperation between Future Challenges and the Sustainable Governance Indicators (SGI). SGI’s new study “Change Ahead? Sustainable Governance in the BRICS” examines policy making in Brazil, Russia, India, China and South Africa. We’ve asked five of our bloggers to tell us what they think about the reports.

In China, social media and blogs are essential for dealing with state censorship and control. But the official media is changing too, writes FutureChallenges blogger Dandan Wang.

Thanks to the SGI BRICS study on China, I now have a comprehensive overview of the country’s development, not just with regards to economics but also social affairs, including the role of the Chinese media. In contrast to its economic strength, China is still lagging behind in social issues. The media is of special importance here as it plays – or should play – a fundamental role for the progress of a society.

Beyond media issues the SGI report also covers such topics as electoral processes, access to information, civil rights and the rule of law. Compared with the other BRICS countries – Brazil, India, Russia and South Africa – China has gained strong competitiveness in the global environment, but its media reporting received the lowest possible score in the SGI report: only 1 point out of 10. This is a challenge for China’s development.

In this context, the SGI report remarks: “Despite the liberalization and commercialization of the Chinese media that has taken place since the 1990s, the country’s main TV, radio and print outlets are still under official control. Social media such as microblogging service Sina Weibo have gained importance as a result, as they provide an increasingly important forum for liberal thought and news circulation, mostly outside the reach of official censorship.”

The SGI report summarizes precisely the ironic situation of the media in China: Since the beginning of China’s reform and opening-up policy the state-owned media has barely changed its role in society. Media censorship still suppresses the control and supervision functions which the media traditionally play in democratic societies. Sensitive topics such as Tibet/Xinjiang or the Tiananmen incident in 1989 are still taboos in the Chinese media.

However, the tongue of the party gradually loses its credibility. Due to the rapid development of the internet, the Chinese public sphere is changing as people can get information from other sources. With the microblogging service Sina Weibo, a relatively free discussion forum was established and plays an important role in China today. Chinese people can post relatively freely and speak their minds on Weibo when they discuss current domestic and international affairs.

Weibo sometimes even develops into an effective weapon against corruption. For example, users on Weibo posted pictures of Yang Dacai, a government official in the Shaanxi province, which showed him at work wearing luxury watches and leather belts. The pictures lasted on Weibo for weeks and resulted in an investigation during the course of which Yang was detained and interrogated.

However, the SGI BIRCS study also mentions examples of censorship on Weibo and states that “these microblog posts often face censorship, while comparatively less prominent candidates’ access to the internet may be disabled, and their microblogs, blogs and all other sites or posts related to them shut down”. Some sensitive topics often get deleted although they are posted more than once. One recent example are the anti-Japan protests which erupted in mid-September in various cities in China over the dispute between China and Japan over the Diaoyu Islands. Some protests turned violent and Sushi restaurants and other businesses perceived to have Japanese connections were attacked. Users commented on Weibo that such irrational activities must be organized by some conspiracy and related these speculations to the up-coming 18th Party Congress of the Communist Party of China. Attempts to post some photos of these “organizers” were futile. Users also complained on Weibo that it took much longer than usual to upload pictures even when the pictures had nothing to do with the anti-Japan protests.

Another problem of Weibo concerns the credibility of the news on the internet. Since the official media often only reports positively about China and pursues the maintenance of stability, ordinary citizens cannot get the whole picture or the truth. Weibo tends to be the only way where people can get their information. However, not everything posted has or is a credible source. People are easy to get mislead because of rumors and false information on Weibo. Actually, these rumors or false information are much more dangerous than just to let people know the truth.

As the SGI study puts is: “The official state-run media still functions according to a logic of ‘positive control’ by framing certain issues according to the official agenda and acting as a political mouthpiece for the central government. However, as much of the media is administered on a local level, space for increased freedom of reporting has opened to some extent.”

As the report continues, the official media is also trying to go beyond the boundaries: Environmental problems, corruption at the local level and the problems of migrant workers have become hotly discussed topics in the official media like the Xinhua News Agency and CCTV, China’s central television. One of my colleagues at Xinhua once said to me that she always tries to be faster than the censors because “once the topic is covered by the media and spread out it will not be sensitive anymore”.