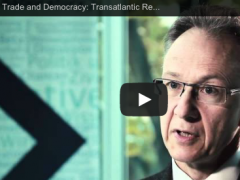 The forthcoming transatlantic free trade agreement (TTIP = Transatlantic Trade and Investment Partnership) between the USA and the European Union was the main talking point of the final workshop of the Internet and Society Collaboratory’s 9th initiative jointly organized by Future Challenges.org and the Internet and Society Collaboratory. Held on the 10th October 2013 at the Heinrich Böll Foundation in Berlin, the workshop bore the title “Internet, Trade and Democracy: Transatlantic relations under the shadow of surveillance“.

The various working groups of the Globalization and Internet group of experts presented their findings in papers. It soon became apparent that the TTIP is not merely a pure matter of economics but also one that affects society and has a particular impact on consumers. In a period that has seen the publication of a glut of studies on the economic consequences of the transatlantic free trade agreement, this workshop was totally dedicated to an analysis of its likely impact on civil society.

The members of a discussion panel made a strong case for the transparency of negotiations. On the one hand they argued that many ordinary people have no idea whatsoever about exactly what the TTIP negotiations are intending to achieve while on the other information of vital importance to consumers is not being disclosed. They pointed out that particularly in terms of consumer protection and employee protection, participation of civil society was essential for reaching agreement in the bilateral talks, and that as the ACTA protests have shown, participation of civil society in the negotiations must be taken seriously.

A further key point in the discussions was the central role played by the Investor-State Dispute Settlement (ISDS) provision in the free trade agreement. The journalist Glynn Moody focused on this issue in his keynote address in which he argued that such a provision is heavily weighted in favor of transnational corporations as it gives them the right to initiate settlement proceedings against government regulations in the target countries which substantially increase their power and place them above the law.