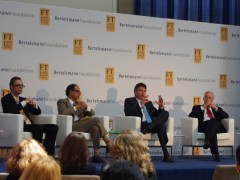 Today’s international monetary system is too flexible and lacks necessary coordination amongst the central banks of major economies. That was the conclusion of a meeting of international financial experts on the eve of the Spring Meetings at the IMF and World Bank in Washington, DC. While the post-World War II Bretton Woods system collapsed because it was ultimately too rigid, Charles Dallara, Chairman of the Americas at Partners Group, sees today’s system as virtually non-existent, with a “palpable lack of coordination in major economies”.

The example of such lack of coordination on everyone’s mind was Japan. The recent move by Japan’s central bank to substantially increase the country’s money supply was understandable, according to Kaushik Basu, Senior Vice President and Chief Economist of the World Bank. But without adequate communication with other major economies, Japan risked exchange rate wars if other economies thought the move was to make Japan’s economy more competitive to their detriment. Because Japan’s central bank ended up buying Japanese government bonds rather than foreign assets to increase the money supply, these concerns were eased.

While international trade has the World Trade Organization to restrain trade protectionism, the monetary sector has no such mechanisms to restrain anticompetitive state actions. Dallara pointed to the IMF’s Article IV Consultations as the beginnings of one potential mechanism, as it entails formally interacting with IMF member states regarding their economic health and financial future.

But one would still need to convince countries such as the United States that they shouldn’t abuse their position as reserve currencies to act at the expense of international interest, emphasized Mauricio Cardenas Santamaria, the Colombian Minister of Finance and Public Credit. And to what extent would the US support limiting its discretion in order to support such central bank coordination? All three experts were doubtful.

For the “G Major” to be successful, then, it would need the participation of a United States Government interested in improving the international effects of its economic policies. If recent history is any indication, “G Major” may not be able to rely on the US to help in creating such a foundation of central bank coordination.

The Challenges of the Eurozone