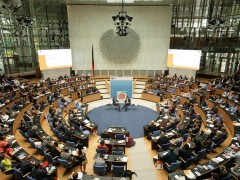 The Deutsche Welle Global Media Forum 2014 in the former German Parliament (Bundestag). Photo published by Deutsche Welle on Flickr under a CC BY-NC 2.0.

I am now well rested from what was an amazing week at the Deutsche Welle Global Media Forum. I had a great time, but I also learned a lot. It was an honor being a part of a conversation that could well be defining what the future of journalism is all about.

The theme was “From Information to Participation – Challenges for the Media”. Having worked for traditional media, I can well agree that the challenges are immense. That there are more challenges sometimes depending on which media house you are working with.

But one of the biggest challenges for this time and age in my opinion includes the conversation on where are we headed? What is the future of Journalism? Do we need to re-define Journalism afresh? Or is journalism undergoing a certain kind of re-invention?

Those are very big questions and they were at the heart of the discussion in Bonn, at the Global Media Forum. The internet and social media have brought an interesting dimension in how we tell stories.  And like the Director General of Deutsche Welle, Peter Limbourg said:

“Journalists are no longer the gatekeepers. Everyone is about of the news and storytelling business these days. So they are no-longer looking out for the news, they are participating in telling the news. This is a hard concept for traditional media to not only grapple with but to also understand and adapt to.”

I have talked to many journalists in Uganda about the benefits of being online. And occasionally one or two will ask me to help  set up a blog for them. Months later nothing has changed. It is not only the individuals; it is also the administrations of media houses in Uganda. For most of them it is about making ends meet. The commercial aspect is most important. So allowing other people and not just one or two people, very many people to help in telling the stories means that the eco-system changes.  Public participation is hard to control; the mechanisms involved have the people at heart, which is somewhat strange for administrations. But this is what the future presents. It is okay to have a Twitter and Facebook page for interaction and feedback during the shows, but listening to what the people say in terms of the direction through which they want the news to be told is something that I am yet to hear of. Even when the ‘ratings’ are low, the content will be changed because of the financial consequences that are involved.

“There is need for a healthy financial eco-system for journalism; one that is not directly influenced by commercial interests to ensure impartiality and fairness” – Dr Mathias Döpfner (CEO of the media company Axel Springer) said. The latter are hard to come by because of so many political interests and commercial interests. This eco-system, if we ever realize it, will get us back to why we chose to tell the stories in the first place: so that both sides are heard and respected.

Journalism is all about gathering, validating and disseminating information. The future needs to have journalism that ensures the delivery of accurate, verified and trusted information but with the people’s participation at the heart of it. Therein lays the dimension shift. This is what true journalism could be in the future.