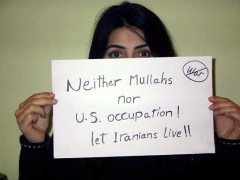 Israel will attack Iran in April, this year. No, it’s not me but David Ignatius who is saying this in his opinion column in the Washington Post. Though the writer hedges his bets by adding that there is “strong likelihood”. Both sides are hell bent on destruction and there is little sign of restraint. The worst part in this whole scenario is that West is blowing its trumpets just like they did before Iraq while Iran has thrown caution to the winds in handling this situation.

Mahmoud Ahmadinejad is bound to appease the hardliners; he is also ready to stake any little hope he has in this process. Mr. Ahmadinejad quite adamantly announced important decisions few days back. On the other hand, Avigdor Lieberman, the Israeli Foreign Minister is not taking any chances, he is upping the ante against Tehran. Those who think that an attack on Iran would be an isolated incident are mistaken, while those who think Hezbollah and Hamas would sit silently by and not intervene are simply unaware of ground realities.

I am old enough to sniff the news and sense the mood swings and maybe understand that it’s the  same build-up that we all witnessed before the Iraq invasion by the US & UK being repeated today. The same CNN insights and Fox rants, US officials looking scared, Washington journalists warning that the going will be tough. The icing on the cake is so-called “analysts” adding their voice to this hysteria, creating further fear in the minds of people or maybe trying to push leaders to take extreme steps. They were the first to say that “they have come to believe that Israel will indeed strike Iran in 2012”. And now we hear that “Israel will indeed attack this April”. What the US role would be in such a move remains to be seen as the US is keeping its cards close to its chest. In my view US would intervene but most probably against Iran.

Superficially it seems like Israel’s major allies are desperately trying to talk it out of this war hysteria, yet on the other hand they are doing everything they can to keep this hysteria alive. Talk of Iran reaching the point where it can develop a nuclear bomb is just like talk of Saddam Hussain having weapons of mass destruction. The idea of Iran developing inter-continental ballistic missiles that could hit the US mainland is exactly the same as talk of Saddam Hussain hitting the doomsday button. In short, everyone is trying to strengthen Israel’s hand if it choses to strike.

The war hysteria against Iran might favour Israel’s case, but it is having a reverse effect on encouraging the regime in Tehran to stick to its guns and resist change. The country that was slowly moving towards a change from within is being pushed to the brink of destruction which will not hurt the dictators or mullahs but the common people who aspire to change and are taking steps. The attack, if it happens, will have no effect on Iran’s capacity to contain the aggressors. It would rather fuel and play to Iranian national pride making everyone in Iran an enemy which they are not right now. Israel and its allies in the West need to understand one thing and this is the pride of Iranian people: without understanding this mindset any action or attack would be an utter disaster. It would make a complete mockery of the little progress opposition forces within Iran have made so far.

The idea that the regime in Tehran is weakened by sanctions is foolish as there is no such idea in Tehran. A country that fought for eight years and brought itself to the brink and still continued fighting could well do the same some decades later. The Europeans warning Israel about taking unilateral action are right, but what they forget is that Israel never held back because of lack of international community support.

A war in Middle East or the world would be of no use to anyone, and especially the crippled economies of Europe and America. War is the last thing they should want to happen. As major diplomatic initiatives are running at full speed, the attacks on Israeli diplomats in India, Georgia and maybe Thailand are not helpful. What worries people like me are the images of destruction already coming from the region. A war is not going to ease anything, it would only complicate matters, making contagion impossible to contain.

The duplicity of world powers is ironic too; when Iranian scientists are killed in Tehran or the Hamas leader murdered in Dubai there is no hue and cry. Now with these bomb attacks the world seems to be falling apart. I firmly believe that this duplicity has damaged Western influence while the constant flip-flopping of the Tehran regime has made it impossible to resolve any issue diplomatically. There have been many groundbreaking moments in the history of Iran’s tumultuous relations with the West, and always it was one side or the other that destroyed all the hopes.

The million dollar question is how do you pull out of this fix where every road leads to a dead end.  I believe the only way out is clear – sincere efforts must be made by both sides to come clean. Saying, “Israel has indicated it is considering this (an attack on Iran), and we have indicated our concerns,” is not going to help. Nor will ferocious boxing in of leaders in a situation where war seems the only alternative.  I remember reading Robert F. Kennedy’s book ’13 days’ and remember that President Kennedy was so concerned about slight escalation that he ordered all his military commanders not to take any step without consulting him. During the Cuban Missile crisis he believed that any isolated step could escalate the situation to full-scale nuclear war between the USSR and USA. He also believed in leaving open the exit door for his enemy, as a boxed in enemy with no option left is dangerous.