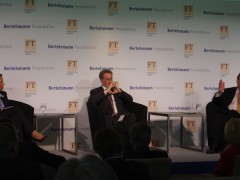 Surrounded by real world examples of conflicts of interest by “Big Three” for-profit credit rating agencies–Standard & Poor, Moody’s, and Fitch, the Bertelsmann Foundation unveiled the blueprint for a hypothetical international nonprofit credit rating agency (INCRA) on April 19th at the climax of the Bertelsmann Foundation – Financial Times Conference held at the Newseum in Washington.

The “Big Three” agencies control 95% of the market and have taken significant flak for mispricing debt for their own gain. The three credit rating agencies follow business models that introduce a large potential for conflicts of interest. In their “issuer-pays” business model, the issuer of a bond to be rated pays the credit rating agency to be rated, providing an incentive for the issuer to seek out the agency most likely to provide the highest rating. Because there are at most three main credit rating players (S&P and Moody’s together represent 80% of the market), this provides an incentive for the agencies to compete to provide a higher rating.

In addition, for complicated structured financial transactions such as collateralized debt obligations (CDO) with different layers or “tranches” of risk, these large credit rating agencies provide advisory services on how issuers can package the tranches to achieve a desired rating, obscuring the risk of default in high-return CDOs compared to similarly rated corporate bonds with lower returns. This led many investors to view CDOs as better buys, unaware that unlike other bonds, CDOs were strongly intertwined with the risky subprime mortgages that ultimately went under.

The Bertelsmann Foundation’s proposal is unique in positioning itself as a nonprofit sovereign credit rating agency, an attempt to neutralize the perceived conflicts of interest in for-profit credit rating agencies. With an initial endowment of US$400 million, the international nonprofit credit rating agency (INCRA) would not be self-sustaining, instead needing to find additional sources of income. In the blueprint laid out on 19th, these sources include corporations (who would find quality ratings important to their investments), civil society groups such as NGOs or private foundations, international organizations or supranationals such the IMF and the European Central Bank, and governments.

Additional measures were offered to prevent any undue influence by governments, but there seems to be little reason to keep the funding option open when the primary goal of INCRA in the first years of its existence is to build a solid reputation of institutional independence and quality. Furthermore, the potential income from government is not needed for the agency. Vincent Truglia, one of the expert contributors to the blueprint and former managing director of the sovereign risk division at Moody’s, noted that the $400 million initial endowment could easily come from two or more private foundations, without the need for government funding and the tremendous complications to reputation and governance it entails.

By seeking or generating no income from the subject of its ratings, the Bertelsmann Foundation can ensue that INCRA is known from the start to be a truly different type of credit rating agency.