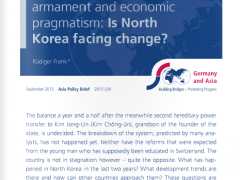 The balance a year and a half after the power transfer to Kim Jong-Un in North Korea is undecided. The new nuclear test in February 2013 led to harsh sanctions, followed by a North Korean reaction that reached a new level with the threat of a nuclear first strike against US facilities. While it remained rhetorical, the escalation was not without consequences: The industrial zone of Kaesŏng that had been operated since 2004, a unique Korea-internal economic project, was closed and has been reopened recently. Yet the breakdown of the system, predicted by many analysts, has not happened yet. Neither have the reforms that were expected from the young man who has supposedly been educated in Switzerland. The country is not facing stagnation however – quite the opposite.

What has happened in North Korea in the last two years? What development trends are there and how can other countries approach them? These questions are discussed by Rüdiger Frank, Chair Professor of East Asian Economy and Society at the University of Vienna and Head of the Department of East Asian Studies in the new Asia Policy Brief. He finds a growing monetization of the North Korean economy and the rise of a new middle class that have the potential to fundamentally change the country.

What can the West do to encourage this transformation? To be sure, the strategic decisions are made in North Korea. But if other countries do not simply sit back and continue to wait for a collapse, Frank argues, they will have the limited opportunity to influence the environment for such decision making by encouraging economic cooperation independent of the political day-to-day-business. “The current system of North Korea is not sustainable. There is no way around opening up and engaging in liberalization. Other countries can, however, influence when and how this process will take place.”