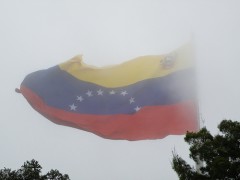 El Comandante’s illness leaves Venezuela on the brink of the unknown (Photo by JR2V published on Flickr under a CC BY-NC-SA 2.0 license)

On October 7, 2012 at 11:32 PM, Venezuelan President Hugo Chávez emerged on the balcony of El Palacio de Miraflores in front of thousands of supporters to accept re-election through 2019.

Thus ended months of speculation. Would Chávez, diagnosed with cancer in 2011, live to the election? Had urban voters soured on him and his Partido Socialista Unido de Venezuela (PSUV) amid soaring inflation matched only by spiking murder rates? Could the opposition coalition truly slay “the dragon of the tropics”?

A eleven-percent victory over the surprisingly disciplined Henrique Capriles provided resounding answers to these questions. With 80 percent electoral turnout, voters affirmed their support of Chavismo, the statist movement implemented by the Venezuelan strongman since his accession to the presidency in 1999.

Basking in electoral glory and red confetti, Chávez spoke of remaining in power until 2031. Opposition intellectuals retreated to Washington to lick their wounds and plead for unity moving forward. It would take time, one stated, teary-eyed at a downtown panel discussion, but eventually his side would overcome. The matter appeared to be settled, at least for the moment.

Two short months later, however, uncertainty has re-emerged with a vengeance in Venezuela.

On December 10, Chávez travelled to Cuba for treatment of a re-occurrence of cancer. He has now undergone chemotherapy and radiation treatments in the last two years, and his illness appears likely to prevent him from serving out his term.

He would leave political and economic chaos in his wake.

Prior to leaving for Cuba, Chávez publicly endorsed Vice President Nicolás Maduro as his successor. Historically reluctant to acknowledge his own mortality, Chávez had previously refrained from announcing any contingency plan. In fact, he had frequently reshuffled his inner cabinet to prevent any consolidation of power. Maduro himself lost his position as foreign minister in December 2011 when the Caracas rumor mill held him as the PSUV heir apparent.

Chávez’s announcement suggests that the end is near and that he knows it. El Comandante has realized that his only chance to save chavismo is to unite his disparate party behind a successor. But the PSUV is deeply fragmented and highly reliant on its figurehead. Once described by party leader Alberto Müller Rojas as a “scorpions nest”, the PSUV without Chávez could quickly devolve into infighting.

Should President Chávez be incapacitated, the Venezuelan constitution demands a new election within one month. A dysfunctional PSUV would by no means be guaranteed victory in any near-term presidential vote.

Conventional wisdom previously held that the Venezuelan opposition was unified only in its distaste for Chávez. Without him, such a coalition would be rent asunder by personal ambition. However, Capriles’ professionally administered campaign suggests a maturation of the opposition. With an apparatus largely still in place, a Capriles-led coalition could rapidly re-assemble and represent a formidable foe for any Chavista candidate.

Vice President Maduro would surely recognize his electoral vulnerability. So, too, would the military, an ostensibly non-partisan body, but one with Chavistas in influential positions. Much status and protection stands to be lost should voters oust the PSUV. The question hanging over Caracas like thick tropical mist is whether the military, in conjunction with the PSUV, would step in to prevent any presidential run-off in the event of Chávez demise.

A Prize Worth Winning?

Venezuela: Poised to collapse beneath debt, inefficiency and corruption? (Photo by SebKe and published on Flickr under a CC BY-NC-SA 2.0 license)

Hugo Chávez’s death would unquestionably generate a scramble for power. But the winner of that competition will face far stiffer challenges as president of Venezuela. The country’s economic foundation is tenuous, at best. At worst, it is poised to collapse under the weight of debt, inefficiency and corruption.

But the statistics are not a tell-all. The figures likely understate fiscal profligacy as Chávez is suspected of significant off-budget expenditures. Import dependence combined with stringent price controls have resulted in basic product scarcity. Fear of expropriation prevents private-sector financing of infrastructure, and no firm has issued an initial public offering since 2005.

Perhaps most disturbingly, these economic statistics have been observed during a period of strong oil prices, which have risen consistently following a brief but steep dip in 2008.

Any economic turnaround will not be as easy as simply removing Chávez. For one, the currency has been thoroughly distorted. The bolivar, pegged to the US dollar since 2003, is overvalued and greenbacks are difficult to procure. The government supposedly offers exchange at the rate of 4.3 to the dollar, but access to this rate is limited and a burgeoning black market has emerged to fill the gap. At more than twelve bolivars to the dollar, the black-market value is nearly one-third of the official value.

Chávez would also leave Venezuela highly leveraged. Between August 2010 and October 2011 foreign borrowing by the government and Petróleos de Venezuela (PDVSA), the state-owned petroleum company, totaled US$21.8 billion. Compared with 2011, the 2012 budget featured increases of 109 percent and 241 percent to interest and debt-amortization payments, respectively. The debt burden will weigh heavily on any future government. Servicing payment alone, below $3 billion annually between 2004 and 2009, will jump more than $8 billion annually between 2012 and 2017.

…Yet Little Time to Lose

Hugo Chávez’s emergency trip to Cuba appears to portend the end of an era in Venezuela. Beloved by millions and despised by millions, his “Bolivarian revolution” is personality based, and his demise would force Venezuela to begin a hurried transition that was never going to be easy.

Chávez’s exit would generate tremendous uncertainty, with plausible outcomes ranging from a smooth election of the opposition to protracted violence, and even military intervention. Regardless of who emerges from this struggle, a new government will face a severely mismanaged economy sustained only by petroleum exports.

But Venezuela is not doomed. Some pressure could be alleviated by oil excavation projects in the Orinoco Belt. With infrastructure investments from the Spanish firm Reposal and US-based Chevron, these fields could generate an additional 300,000 barrels of oil per day. Efficient exploitation, however, would require significant maturation on the part of state institutions.

With the nation’s patriarch potentially facing a terminal illness, Venezuela may be forced to grow up quickly.

Reform and Backlash: What Europe Can Learn from Latin America – http://futurechallenges.org/local/reform-and-backlash-what-europe-can-learn-from-latin-america/

And Then the Earthquake: In Central America, Earthquakes Topple More Than Buildings – http://futurechallenges.org/local/and-then-the-earthquake-in-central-america-earthquakes-topple-more-than-buildings/