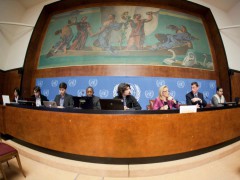 Being one of the six Internet Freedom Fellows gave me the opportunity to get a fresh perspective on the power of new media and its challenges, as well as a new appreciation of the core value of internet freedom. This articles gives some of my thoughts on my two week program organized by the US mission to the United Nations and held from 19 to 30 June 2012 in both Geneva and the United States.

In an age of connectivity new forms of media have proven to be an effective tool for disseminating information and organizing groups in their quest for the realization of human rights and promotion of democracy. As shown in recent developments around the world, new media – defined as the digitalization of information – have fostered dynamic change and opened the doors to new channels of internal dialogue between the governed and their governments. This notion is also put forward in the book Consent of the Networked by Rebecca Mackinnon, co-founder of Global Voices Online and a former journalist with Asia-based CNN. All the Internet Freedom Fellows present from six countries – Azerbaijan, Cambodia, Burkina Faso, India, Syria and Venezuela – also endorsed it.

In closed societies like Cambodia where traditionally freedom of expression and freedom of the press have been strictly controlled, the growth of new media and increased access to online information are opening up new frontiers and providing fresh opportunities to individuals and organizations who work to promote and protect human rights and democracy.

The absence of any restrictions on online expression was such that a “clogger”(Cambodian blogger) described the internet as Cambodia’s “new digital democracy”. Indeed, despite its poor record on freedom of expression, the Cambodian government has not sought to censor online content and space in any degree unlike several of its neighbors in South East Asia – particularly Vietnam, Laos and, more recently, Thailand. Cambodia has a far better standing in this respect than countries in Latin America such as Venezuela or elsewhere like Syria.

As the Venezuelan Fellow at the conference explained, the internet surveillance system allows the Venezuelan government to access the nation’s telecommunications infrastructure and spy on any aspect of people’s activities, thus further weakening privacy. Anonymous speech in the mass media and on the internet is simply against the law.

In Syria under a dictatorial regime rights to peaceful assembly are not guaranteed under the terms of the emergency law that been imposed on the country for the past 50 years. Even five people are not allowed to get together or meet lest they be accused of “establishing a secret society”. Though the internet is a crucial tool for promoting civil communication and intellectual awareness of political and human rights, the regime considers this kind of activity a crime. The Syrian Fellow told us that one of the risk-taking cyber security activists is now living in exile. The country is also facing a huge electronic army who are mainly technical experts assigned to develop tools to monitor the online activities of human rights activists, track them down and punish them.

Listening to such harrowing restrictions faced by the Fellows present at the conference again reaffirmed my positive view of “digital democracy” in Cambodia. At the same time it would be scary if such a scenario were to be imposed in Cambodia where the internet has become a vital and alternative medium through which citizens can share information and opinions on issues that directly affect them – especially given the current restrictions in the offline environment. If upheld by the government, the legacy of digital democracy in Cambodia would bring emerging trends – with individuals and organizations alike embracing and utilizing new media – which would represent positive developments in the country. Firstly, it would promote gender equality as many female internet users participate in online chats, social networks and blogs; secondly, access to news sources would enable people to increase their knowledge and awareness of crucial issues; and, thirdly, it would increase people’s awareness of global developments and make them better equipped to accept or criticize change in their countries and the ways in which they are governed.

The two-week program not only allowed me to reflect on the important role played by internet freedom and its legitimacy in Cambodia – it also gave all the Fellows, myself included, fresh and rich insights in our various meetings with key policymakers who play important roles in fostering the rights to internet access and freedom. The human rights council policymakers convened a team club consisting of Brazil, Nigeria, Tunisia, Turkey and also joined Sweden to push for the adoption of a resolution upholding the internet as a basic human right. This resolution was reported to have been finally adopted on Thursday 5 June 2012.

Through this program, the Internet Fellows met with key private online providers, including Google and Yahoo, to advocate observance of security, protection and integrity of the human rights principle in their business operations, particularly, in the case of restrictive regimes. We also connected with key players offering platforms like the stream of Aljazeera and Ustream in an effort to increase awareness of the risks taken and encourage those in the front line such as tech4net project and the Electronic Frontier Foundation to support cyberactivists at risk.

Only if there is recognition of such struggles by key grassroots and net-activists and support – including the establishment of programs like the Internet Freedom Fellow Programs (thanks to the US mission to the UN ) – and appeals that send strong messages to all governments that only with open and more free dialogue, the gap of social discourse and distrust between them and their constituencies can be bridged. Thus with such concerted efforts digital democracy can surely be maintained in Cambodia and other neighbouring countries.

Pictures and videos of the Internet Freedom Fellow Program are available on the US Mission to Geneva’s flickr page and on the Voice of America, Khmer section.