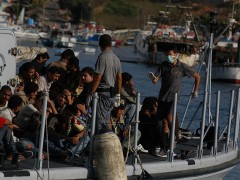 In the light of recent expansion of the Islamic State in the zones of Tripoli and Tobruk, Italy became the next frontline country in the crusade against Islamic extremism. Rome fears terrorist strikes, calls up for a NATO intervention, but a real problem might not come accompanied by the roars of exploding bombs.

Libya, a long destabilised para-state entity, torn between two combating fractions which overthrew Muammar Gheddafi in 2011, came to world’s attention again last Sunday. The Islamic State released a video showing the beheading of 21 Egyptian Coptic Christians on the country’s Mediterranean coast. The reaction of Rome, Libya’s offshore neighbour deeply embedded in the country’s home affairs due to a legacy of colonial rule and, most importantly, a recent ever-growing problem of waves of immigrants compassing the Mediterranean, was quick and unhesitant. Matteo Renzi, Italy’s Prime Minister and the young up-and-coming star of European politics, requested the international community to undertake immediate action to halt Libya’s transformation into another stronghold of Islamic extremism. He pledged himself Italy’s readiness to train local military forces and to monitor a potential ceasefire. Concerns are in any case legitimate – the Mosul-based Al-Bayan radio station, widely considered to be the official narrative voice of the Islamic State, publicly  declared Italy its top enemy. What followed were pledges of a revenge for Rome’s involvement in the coalition of Unbelieving Nations (a label given to United Nations by ISIS). Be that as it may, shooting in a newsroom or planting explosives outside Milan’s Duomo is not what Italy should actually fear the most.

As little as 300 km separate the shores of the two countries – enough to be sailed through on a broken-down cutter or a semi-stable raft. In fact, nearly 180,000 people have attempted to make the illegal maritime journey to Italy within last 14 months only. In 2014 alone, according to Eurostat data, the Italian government registered some 48,000 asylum applications, most of which came from immigrants rescued, oftentimes miraculously, from the seas of the Mediterranean. However, the large number of asylum inquiries does not mean that Rome is particularly welcoming towards refugees – it might be perceived as such by the newcomers, but there is more to it than just a couple of forms to be filled in. On the contrary, the modern Italian society, once itself a nation of migrants and paradise-seekers, has today a growing problem with absorbing the others – of different race, ethnicity, belief. And the vast array of rightist parties and groupings, characterised by an openly anti-immigrant rhetoric, ranging from the well known Lega Nord to protagonists such as former Berlusconi’s ally Angelino Alfano and Alessandra Mussolini are not just purely political entities – they are a projection of the sentiments expressed by their voters. As demonstrated by a study commissioned by Pew Research Centre, the Italians are found to be Europe’s most hostile nation with regard to immigration to their country – 69% of them disapproves of an extended presence of foreigners, perceiving them as stealing jobs and posing a threat to the country’s internal stability. Incidents of racial abuse, anti-immigration demonstrations and societal pressure to exacerbate the asylum policy travel the country independent of the internal divisions between the regions and the ever-present North-South divide, mostly aimed at the immigrants identified as coming from the Middle East and Maghreb regions.

Interestingly, however, the numbers again reveal how wrong such assumptions are. Although no precise research has been done on the matter and estimations run the risk of being too vague,  according to the Italian government, only 30 to 40% of foreigners settling permanently in Italy are believed to be coming through maritime expeditions or other forms of illegal immigrations – others simply come on tourist visas and overstay, deliberately or not. But societies are hardly ever led by numbers – their sentiments are oftentimes fuelled by what they are told, and media do not mention the Americans or the South Africans who turn their Tuscan vacations into years of residence. What is to be feared the most is that this knowledge is widespread amid Islamist radicals. Following the execution on Sunday, a telephone conversation among top ISIS servants has been intercepted, revealing a catastrophic plan of flooding Europe with 500,000 immigrants, most of whom would enter the continent through Italy. Such a barbaric plan is hard to imagine materialising, but it would fulfil the prophecy of Gheddafi himself, who cursed the Mediterranean to become „a sea of chaos”. Needless to say, no country in this world would be able to cope with such an inflow of migrants, but given Italy’s already high levels of discontent with immigration matters, a further increase of people trying to enter the country through its southern shores could trigger public violence and enormous internal destabilisation.

In fact, signs of such growing anti-immigrant tendencies are already rather apparent – to mention only the fast criminalisation of the football fans community, which denies the right to represent Italy for its ethnically African players, such as Mario Balotelli and Stefano Okaka. The duo was subject to numerous incidents of racial abuse whilst playing internationally for Italy, even established authorities of Italian public life stated that „there is no such thing like a black Italian”. Similar phenomena, nonetheless, occur to ordinary immigrants as well – the example of Hulia Zola Sini, harassed outside her son’s school in Reggio Emilia for „being black, therefore a fake disabled person”, is just one of many.

Time to rethink our understanding of the threats posed by ISIS to European societies. It really does not take to fire a single gun on one’s territory to shake its foundations irreversibly.

Mateusz Mazzini is a Polish-Italian freelance journalist and political analyst. He is a graduate of St Antony's College, University of Oxford, where he read for Master of Science in Latin American Studies. Mateusz previously studied at Aberystwyth University, Universidad de Córdba and Basque Country University in Spain, having also lived in 5 other countries. Currently he cooperates with the biggest Polish daily papers and POLITYKA INSIGHT - Poland's leading think tank. In both his academic research and journalistic commitments, he compromises Latin America and Central and Eastern Europe, covering issues from both these parts of the world.