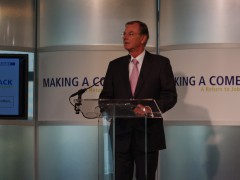 Gunter Thielen, President and CEO of the Bertelsmann Foundation / Photo by Michael Carbone

Jobs and growth are back in the spotlight in the Washington, DC policy conversation.

Gunter Thielen, the President and CEO of the Bertelsmann Foundation, highlighted a number of outstanding issues that would be dealt with over the course of the Bertelsmann Foundation Financial Times conference on April 19th in the Newseum. Thielen believes much can be learned between European countries and the United States as they hope to continue to recover from the global economic recession, and that such transatlantic collaboration is key to jobs and growth, the theme of the day-long conference.

The US could learn from short-term working programs instituted in EU countries such as Germany, and European countries could in turn take a page from the US’s less generous “up by your own bootstraps” approach to a welfare system. And while such a system may seem more favorable for businesses and growth, it introduces significant social uncertainty and jobs volatility into the economic equation. The result? What Thielen described as “the most vexing question to US recovery”: persistent US unemployment.

With the morning panel discussions devoted to this topic of labor market issues and reform, Thielen unveiled the blueprint for an international nonprofit credit rating agency (“INCRA”), a contribution Thielen and the Bertelsmann Foundation hope will help reduce the likelihood of a recurrence of the economic crisis we are still trying to get ourselves out of. With a uniquely nonpartisan and not-for-profit viewpoint on sovereign risk, Thiele hopes the planned agency will add an important stabilizing force in the international financial markets and better predict the capacity and willingness of countries to service their debt. In turn, the shared project would improve trust and cooperation between the major economies and allow them to better tackle the underlying issues currently impeding what the developed economies are most desperate for: jobs and growth.

Such cross-boundary and systematic thinking has been missing in the standard policy conversation up until now. With Thielen and the Foundation’s lead, a proactive environment has been created to discuss and resolve these global economic issues. Let’s hope the rest of the policy establishment is up to the task.