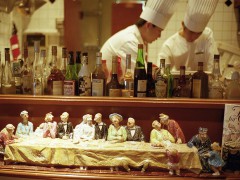 The idea of a transatlantic free-trade zone is nothing new; at least it’s not as new as many people might think since it can be traced back to the founding of NATO. And while NATO is a purely military alliance, the notion of an Economic NATO is pretty much at the heart of the present negotiations on the Transatlantic Free-Trade Agreement (TAFTA).  Once transatlantic cooperation on security policy had been put in place, there were repeated discussions on possible forms of economic cooperation between the two sides in the years that followed. Yet serious negotiations and talks were only possible with the fall of the Iron Curtain and thus could only begin in earnest in the early 1990s.

Yet despite extensive deliberations, it was only on 30 April 2007 that the Framework for Advancing Transatlantic Economic Integration was finally signed.  This agreement and the interest shown in strengthening economic integration between the two blocs led to the founding of the Transatlantic Economic Council whose chief mission is to pursue the goals established in the agreement and thus promote economic cooperation.

At the EU-US Summit held on 28 November 2011 the free-trade agreement was given a more definite shape. The Transatlantic Economic Council set up the High-Level Working Group on Jobs and Growth whose first findings and reports were expected at the end of 2012. The work of this group forms the basis on which the negotiations for the Transatlantic Trade and Investment Partnership (TTIP) are conducted. Two days after publication of the Report by the High-Level Working Group on Jobs and Growth on 11 February 2013, a joint declaration by both governments announced that both economics blocs had come out in favor of a free-trade area.

Following publication of the guidelines for  the forthcoming TTIP negotiations by the European Commission in March 2013, three months later on 14 June the Member States of the European Union gave the go-ahead for the negotiations, even though American-European relations had received a serious long-term set-back with the eruption of the  NSA scandal in the same month. Despite the deep disquiet and furor this caused, agreement was made on the first round of negotiations  between the two blocs which duly took place on 7-12 July in the United States.

At the same time as the TTIP negotiations, agreements were also reached between the EU and Canada on a free-trade agreement (CETA). These negotiations are already at an advanced stage and a first agreement was signed on 18 October 2013. Although various key points of the European-Canadian agreement still have not been negotiated, it is expected that the CETA will be ratified within the next two years. Even though CETA is an autonomous free-trade agreement, in the context of the TAFTA/TTIP negotiations between the US and the EU, it is viewed as a “framework treaty” for the whole of the transatlantic economic alliance.

The second round of TTIP negotiations scheduled to take place on 7-11 October in Brussels had to be postponed due to the lockdown of the American administration. They took place on 11-15 November. The date for the opening of the third round of negotiations, which once more will take in Washington, has been fixed for the 16 December.

TAFTA/TTIP: Cooks aren’t the only ones who decide how good a dish is

Until only fairly recently I never spared a second thought for the forthcoming transatlantic free-trade agreement (TAFTA). After all, why should I? It seemed to me just another one of those bilateral agreements between our own European superbloc and that of our American friends and allies which would come to pass anyway, one whose effects would probably turn out to be less spectacular than expected but still positive enough. Admittedly, as a student of politics I should have shown more interest in it, but I can at least partly excuse my indifference by pointing out that it was fully shared by most of my fellow students.

The key media too only paid the most cursory attention to TAFTA/TTIP and their comments amounted to little more than “fewer customs duties, more jobs and economic growth – really brilliant!” For sure, the free-trade agreement will have positive effects on many sectors of the economy in both the United States [1] and Germany [2]. The creation of 160,000 new jobs in Germany alone is not to be sniffed at. Yet it only became clear to me at a much later date that economic benefits are only one side to the agreement. I‘d only glanced at the protests and demonstrations against the forthcoming free-trade agreement that I saw on social media. And if there don’t seem to be any signs of an ACTA-driven boom in protests, this must have to do with the complexity of the issues being dealt with. In other words, I was pretty much like your average man in the street who’s pretty easy going as long as he’s got a steady job and income, and can eat what he likes. But here I should sound a note of caution: you have to watch what you eat and who’s cooked it. Because a free trade set-up is very much like a restaurant.

Genetically modified corn and chlorine-dunked chicken? No thank you!

Today I’m glad that I’ve changed quite a lot in my views on TAFTA/TTIP. Since I’ve been working as an intern at FutureChallenges.org where I’ve been dealing with the free-trade agreement and its follow-on effects on a daily basis, I’ve come to realize how very reckless it is to turn a blind eye to such issues. And if I’m calling myself just an average kind of man in the street, this should be a warning to all other average men (and women!) on the street that TAFTA/TTIP is an issue that directly concerns us all.

There are a whole load of issues right now on the negotiating table between the EU and the USA that we really need to take a closer look at. One of these issues which is steadily coming into the public eye is consumer protection. As I’ve already mentioned, I was relatively unconcerned about the possible impact TAFTA could have on such an issue. Yet when I make an effort in everyday life to watch what kind of food I’m eating and try to maintain a healthy diet, then it’s impossible for me to shut my ears to this debate. Particularly when you consider that the standards governing foodstuff production in the EU and the USA are light years apart. How can you find a “middle way” when the two sets of standards are so extremely different? Honestly speaking, I don’t want to find chlorine-dunked chicken in my supermarket or find that cut-price genetically modified corn has muscled all other types of corn off the shelves.

TAFTA: a warranty for product diversity – not for product quality CC BY 2.0 Photo by Christian Schnettelker

But TAFTA/TTIP wouldn’t be the tangled issue it is if no other important and decisive issues for ordinary people weren’t on the negotiating table. Take data security. On the one hand, when it comes to data security, we’re lagging almost 20 years behind the times in Europe, and on the other there’s nothing much we can do about it. No matter how much we huff and puff, the NSA is watching us and Google is keeping a record of everything I look up on the internet. Even so, the NSA scandal could well have brought a breath of fresh air into the free trade debate, particularly as it was headline news in the media for a few weeks. You have to be a little disappointed that just a few months later it’s lost all its heat and become a dead ember that hardly anybody can get excited about. Even German politicians – from whom you could have expected something better – have been remarkably quick off the mark to shut the book on this topic. So it’s only logical that data protection will not be treated in the TAFTA/TTIP rounds with the attention that it so obviously deserves. And while it’s true that the #Merkelphone scandal has once more brought the whole debate out into the open, the hot air and bluster it’s produced by far outweighs any attempts to engineer specific remedies for enhanced data security. There is now talk of a bilateral No Spy Agreement that should help to mend fences – but is anyone really helped by this when it seems likely that such an agreement will only impede the introduction of an effective treaty on data protection?.

Consumer protection and data security are only two of the many topics now being negotiated in the Transatlantic Free-Trade Agreement in which the public does not, or cannot, show much interest.

No flavor enhancers – transparency and participation are what we need

Finally, the lack of transparency in negotiations is a matter of particular disappointment to me. Particular disappointment because nowadays it should be abundantly clear that vital issues of crucial importance to consumers can no longer be dealt with by deals between negotiating partners and lobbyists – civil society too must have its say. What is needed here is not only a much broader public discussion but also readiness on the part of the EU and the USA to let all concerned parties have their say.

The cook decides what the dish is – the customer decides whether it’s good or not. CC BY-NC-SA 2.0 by Shinsaku

So far trade agreements of all kinds have always been negotiated by governments and major corporations behind closed doors – with seriously detrimental effects for ordinary people. What’s happened to the right to have your voice heard and why can’t the issues at stake in negotiations be fully revealed for public scrutiny? In my view, without transparency and participation agreements of this magnitude are no longer possible. After all, it’s not just 5 star chefs alone who decide what makes a good dish; the guests in the restaurant also have their own opinions which decide whether a dish gets a place on the menu or not.
In other words, it’s not just government and industry that are called on to act; civil society too must take its own role seriously.