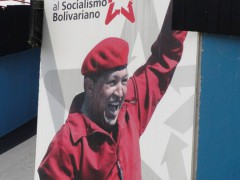 Three reasons Chavistas may stay in power in the short term, and three reasons they could lose it by 2020

Chavismo after Chavez? (Photo by Lubomir Sokol, All Rights Reserved)

The rumblings from Caracas started early in the morning. By 9:00am residents of the capital noted an inordinate military presence around the Miraflores Palace, the presidential office. By 11:00am Venezuelan media reported that government ministers, governors and United Socialist Party of Venezuela (PSUV) elite were gathering at the Palace. At 2:00pm Vice President Nicolás Maduro expelled two US diplomats. Finally, at 4:55pm, with the Venezuelan twitter world abuzz with reports of jammed cellphone lines, Maduro announced the death of Hugo Chávez, the man who had lorded over Venezuela since 1999.

What is next for Venezuela? Can Chavismo and the PSUV survive without its namesake and founder?

There are three reasons that Chavismo will likely retain power in a forthcoming presidential election that, according to the constitution, must be held within 30 days. There are also three reasons why the PSUV will struggle to maintain that power.

1. Chavistas will dictate the conditions of any forthcoming election. The Venezuelan government has been built in Chávez’s image over 14 years. The Legislative Assembly, Supreme Court and PSUV governors control 20 of 23 states. Eleven of these governors are former military officials, indicative of Chavista reach into the armed forces. PSUV officials will determine the timing of the election and the rules for the vote. The incumbent stranglehold on institutional power will have key procedural implications. Although a ballot must occur within a month, for example, nothing stops the government from announcing that elections will be held more quickly. Such a move would severely limit the opposition’s ability to organize and execute any campaign. The Chávez camp may alternatively seek to delay the elections until June or July, although this would require constitutional maneuvering. In this case, the lag time would allow the benefits of a recent currency devaluation to set in and give the government time to reform a backlogged import system that has led to a scarcity of basic goods.

2. Hugo Chávez died an extremely popular man. Given the generally negative perception of Hugo Chávez internationally, it can be easy to forget that he commanded resounding support at home. Despite the unprecedented cohesion of the opposition in the October 2012 presidential election, Chávez still garnered 55 percent of the popular vote. His sickness appears to have bolstered his popularity. The day before his death, Asdrubal Oliveros, a Venezuelan analyst at Ecoanalitica, reported that Chávez’s favorability rating topped 70 percent. Opposition leader Henrique Capriles could not beat the sick man, and he is unlikely to beat the newly minted martyr. The sympathy and nostalgia vote will almost certainly see the PSUV through the next election cycle.

3. The PSUV still controls the purse strings. The powerful state-owned oil company Petróleos de Venezuela (PDVSA) is solidly in the Chavista camp. At the same time, oil prices remain above the magic level of US$90 per barrel. This represents a daily influx of hard currency into the coffers of a state starved for dollars. Given the recent devaluation, this consistent source of cash will give the PSUV the resources required to lavish the electorate in the run-up to an election. This model proved successful for the PSUV in the past as Chávez’s spree ahead of the 2012 elections left the Venezuelan social spending-to-GDP ratio the highest in the region.

These factors combine to suggest that the PSUV will win any presidential election held in the next four months. But their grip on power may be short lived, again for three reasons.

1. The PSUV is sharply fragmented and is unlikely to maintain its integrity. For years, Chávez maintained a heavy hand in day-to-day government activities. Now, his carefully manicured apparatus appears unsure how to act without him. Once described by party leader Alberto Müller Rojas as a “scorpions nest”, the PSUV without Chávez could quickly devolve into infighting. Two factions have already emerged. Vice President Maduro, recommended by Chávez as the next party leader, represents the more radical, ideological wing. National Assembly Speaker and Acting President (at least according to the constitution) Diosdado Cabello is seen as less doctrinaire than Chávez and carries more pull with the military than Maduro. Power struggles have already been occurring backstage in Caracas; now they will move to the fore.

2. The memory of Chávez will dull while the pain of an ailing economy will sharpen. The recent 32-percent currency devaluation will provide short-term relief, but it does not address the Venezuelan economy’s underlying problems. Inflation, more than 20 percent in 2012, will increase with the weaker bolivar, and the pass-through effect (the effect of more expensive imports on prices overall) will be strong. Venezuela’s heavy dependence on imports is the result of government mismanagement that has led to a collapse of economic activity beyond hydrocarbons. Even the all-important oil sector has suffered as the government has strangled PDVSA’s budget and diverted funds from investment and maintenance. A President Maduro would lack the political capital, mandate or desire required to attack the vested interests behind these inefficiencies.

3. The opposition will strengthen while the PSUV will be held accountable for worsening economic and social conditions. The opposition demonstrated patience throughout Chávez’s illness, and this strategy could pay off in the long run. Chávez’s demise was inevitable, and the opposition did not waste political capital attacking the legitimacy of a popular, dying president.

The opposition will put up a fight in immediate elections, and, while likely to lose, it can then focus on future campaigns. The sympathy vote should see the PSUV through one election cycle, but support is likely to deteriorate with the economy and public safety.

If the opposition can maintain cohesion, time is on its side.

One chapter is ending in Venezuela. What will the next bring? (Venezuelan sunset, Photo by Lubomir Sokol, All Rights Reserved)

Still on the Brink: Seven Things We Know About Venezuela
Post-Chávez Venezuela: A Country on the Edge