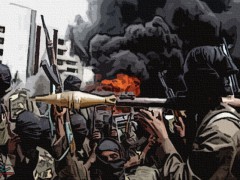 When Oswald Mbuyiseni Mtshali wrote the classic ‘Nightfall in Soweto’, perhaps he had peeked far into the future and seen the exact similarities between his protagonist and Boko Haram in all their deviousness.

When he wrote, “a murderous hand, lurking in the shadows, clasping the dagger, strikes down the helpless victim”, maybe he had seen correctly, but not far enough to predict that terrorism in Nigeria would become so brazen it wouldn’t require the cover of darkness. In the aftermath of the two bombings in Nyanya in less than one month, Abuja, even with the heightened security presence in that area there were attempted kidnappings from a nursery and primary school, in broad daylight.

Perhaps, “lurking in the shadows” refers to the hands of the financiers, equipping this terrorist group in one breath and joining us hapless citizens to call for government intervention in the next. And they have to be heavily financed, how else would a group set up originally to counter Western Education (Boko Haram is short for ama`at ahl al-sunna li-da`wa wa-l-gital, meaning against Western education) suddenly delight in using sophisticated weapons created by the West?

Take the first bombing in Nyanya Motor Park on the 14th of April around 6.45am, peak period for commuters. The carnage from the one explosion included sixteen coach buses (what we call ‘luxurious buses’), about twenty 18-seater buses, and well over 30 cars. Reports are still conflicted on the lives lost but the last count put them at over 200, with many more still in hospital with varying degrees of injuries. All of that, from one explosion – had to be an ‘educated’ mind behind that, no?

It has also become the favorite past time of these insurgents to storm Police Stations of their choosing, open fire, and free prisoners at will. More times than not they are successful because they have the element of surprise, but also because they have superior firepower. They’ve been said to appear, sporting weapons like RPG’s, grenades, and pump action rifles – shouldn’t a hatred for Western education spread to the products of that education?

“Where is my refuge, where am I safe? Not in my matchbox house where I barricade myself against nightfall. I tremble at his crunching footsteps; I quake at his deafening knock at the door. ‘Open up’, he barks like a rabid dog, thirsty for my blood.”

This speaks to the heart of the helplessness we all feel as citizens, and here’s three recent reasons why:

“Nightfall nightfall, you are my mortal enemy. But why were you ever created? Why can’t it be daytime, daytime forever more?”

This is our cry, the prayer on the lips of every Nigerian today. We want to, we need to go back to the days before this nightmare, this nightfall.