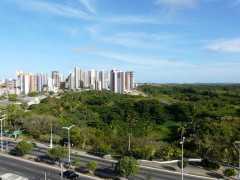 A mobility project has been sparking controversy in the city of Fortaleza, Brazil, since early July, 2013. Why? Because a scheme to construct two overpasses requires the  cutting down 94 trees in Cocó Park, the city’s largest green lung.

The city government promised to compensate this sad loss by planting three times as many trees with native species — the majority of the 94 trees were exotic. Nevertheless, outraged citizens kickstarted a mobilization that garnered support against the proposed urban development plan and led to the current Occupy Movement which has been going on for two months now..

Watch the city government’s promotional video for the project at:
http://www.youtube.com/watch?v=D6LtoF0k340

The city government argues that the overpasses are a solution to traffic jams that enables effective mobility and the better flow of vehicles. And indeed from 1991 to 2010, Fortaleza did experience a population growth rate of 38% that peaked at 2.4 million people according to the 2010 census by the  Instituto Brasileiro de Geografia e Estatística. In 2012, Forteleza weighed in as the 9th biggest city in Brazil that made the single largest contribution [pt] to the country’s gross domestic product (GDP).

Such economic growth has put the city firmly on the national map. The proposed overpasses are just one of many urban development schemes to adapt Fortaleza to the growing demands of citizens and businesses (there are four major shopping centers under construction around town) but also for the 2014 FIFA World Cup games set to take place there.

But cutting down almost 100 trees didn’t sound sustainable to some. In the video above, a couple of citizens share concerns online about how pedestrians and bikers would be able to get around. In short, is it a growth aiming at promoting cars and business, or is it growth that is inclusive and sustainable? There is a strong underlying feeling in the city that temperatures are going up year by year, that the number of cars is on the rise, and that there is a severe lack of green public spaces.

On 12 July, construction workers began cutting down the 94 trees, but 15 people [pt] intervened, standing and holding hands  in front of 15 other trees  marked to be felled. The photos of this demonstration were widely circulated online and garnered support with the idea of “preserving the green”, gradually turning the mobilization into an Occupy Movement motivated by the fact that the Cocó Reserve has not yet been given watertight legal status since it was first created in 1989. Its uncertain legal status has left loopholes to be exploited by companies that construct or attempt to construct buildings and condos around the park or within the area of the original 1989 reserve. Cocó Park is in fact of vital ecological importance as it protects the Cocó river’s mangrove forest.

Protesters placed a board on the future construction site demanding a “Permanent Preservation Area Now”. In the background you can see the Occupy Cocó campsite. Photo by Fernanda Meireles on 28 July. Used with permission.

On 31 July, the city’s vice-mayor used his Facebook profile to criticize [pt] protesters as being “eco-boring” , “eco idle”, and against the “evolution [of Fortaleza] as a metropolis” in a “modernizing world”. On 5 August, the state governor paid a visit to the OccupyCocó site at night to hear and talk to protesters who stressed the “beauty of pure nature”. Yet only two days later, the city’s civil guard intervened late at night using pepper spray and tear gas to dismantle the camp. Despite the violence of the explusion, the camp was rebuilt on the following day.

Alternatives proposals to the government’s project have been sought by many in an attempt to go beyond the “nature vs. progress” debate. Architects and architecture students share their imaginative proposals online through digital publication and videos on YouTube. Bearing in mind the twin requirements of keeping the park’s trees safe and promoting alternative means of transport, new proposals have included bike lanes, tunnels, roundabouts and bus lanes as features for sustainable growth. Their proponents argue that numerous world cities once focused on cars have transformed high lines and overpasses into green areas or public spaces, citing such famous exampleas as the High Line in New York City and Minhocão in São Paulo.

Yet despite widespread protest, the mayor of Fortaleza still shows no signs of changing the project. The OccupyCocó campsite is still standing after over 60 days despite the city government’s efforts to dismantle it through court rulings. When the federal justice system took over the case – as rivers and beaches are considered Federal Union areas – an impasse was reached that has succeeded in giving the movement more popular support.

Mobility is always one of the main challenges large urban areas have to face in providing greater quality of life for citizens and efficient transport lines for the economy. This was the issue that ignited the June protests in Brazil, and led to much discussions about what democracy actually means. Similar to the protests in Taksim Gezi Park in Istanbul, OccupyCocó is a local protest that is nourished by people’s concerns about democracy as well as urban growth and sustainability.