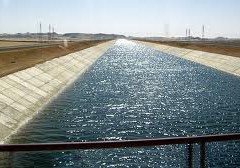 Egypt has a population topping 80million. Most of that number is huddled around the Nile River as it makes its long, winding journey across the east of the country, leaving vast desert to the west and south of the country.

Two mega-cities, Cairo and Alexandria, sit in strategic places of the vast country, together commanding more than 15% percent of the country’s population. At 8.1million and 4.4million people respectively, Cairo and Alexandria are amongst some of the largest metropolis in the world, easily in the top of the charts in Africa.

There is a strain on resources in Cairo especially from where the central government runs the country. The government has put together an ambitious plan to reclaim 3.4million acres of desert in 10 years, in a project known as the Toshka Project. When complete, the project will provide new housing, arable land and business complexes suitable for housing about 16million people. A further 2.8million jobs will be created. In totality, this project will take immense pressure off Egypt’s rapidly expanding megalopolis.

In 2005, the American Society of Civil Engineers awarded the project for being one of the top five civil engineering projects of the year. This is not exactly a project to just build a new city and shove the excess population off the big cities’ carrying capacity into it. This is a national dream to make the country’s 95% desert area smaller.  Moreover, in perspective, the pressure will generally be taken off the inhabited country where people are crammed. Naturally, people will almost just ‘diffuse’ into new spaces created. The government intends to start getting people interested in reclaimed portions of the desert, by selling large tracts of land to college graduates on the cheap, with many years for repayment.

The Toshka Project may fail or not. Regardless, it is a statement of what globalization, climate change and urbanization have required us to do in order to cope. Just like the Masdar City project in the Gulf, which must adjust to the Arabian heat, the Toshka project must be prepared for possible tension between Egypt, Sudan, Ethiopia and seven other countries that host from the Nile basin.

Ultimately, Egypt will benefit if the Toshka project succeeds. Environmentalists have been skeptical about the sustainability of the project, claiming that there will be significant losses from surface evaporation as the canals pass through searing heat. Pipes will increase construction cost and even though polymer coating and other technical arrangements have gone into avoiding seepage losses in the canals, the environmentalists have a point. From a neutral’s point of view, this project should succeed.

From what we know of Egyptians and their large appetites for impressive engineering feats, it would not be a surprise if they are able to make 25% of their land arable and habitable as their target is. Necessity will push them to achieve this. They may not have a choice.