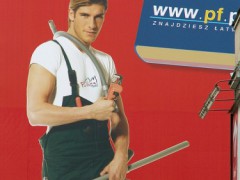 Polish emigrants are safe and sound abroad. The Government plan (or rather slogan) for their return is wishful thinking. Why? Because Poland doesn’t offer any incentives – as you can earn enough to live on for a whole year in Poland in just four months in the UK.

Reading Samuil Simeonov’s lead article, it’s hard to say if remittances have a positive or a negative influence on the new economies. While creating a certain level of dependency on foreign economies, remittances considerably improve the lives of the people who receive them. Yet in the case of Polish emigration the real question is why these people quit Poland in the first place and – more to the point – why they don’t want to return.

After Poland joined the EU, thus gaining access to employment markets in  the UK and Ireland, Polish workers flocked there in search of a better life. According to estimates by the Research Institute ARC Market and Opinion and Central Statistical Office, the total number of Poles working in EU countries is over 2.2 million witth the majority located in Ireland and the United Kingdom (over 1 million) and Germany (over 400,000). Needless to say, these figures refer only to Polish citizens registered in the host countries; the actual figure for Polish labor migrants is likely to be much higher.

A photo of the "archetypal" Polish plumber, the symbol of Polish labor migration to Western Europe. Picture by jaime.silva

According to statistics, Polish emigrants sent over 4 billion Euro home in 2010, primarily from EU countries. Germany is still top of the list with 1.15 b Euro, with the UK (811 m euro) and Ireland (670 m euro) in second and third place. The Polish government has acknowledged this as such cash backs are an important part of the Polish economy [1]. In other words, without remittances some families in poor regions would have been driven below the poverty line – the majority of poor regions with older population structures and few employment opportunities are highly dependent on remittances.

Yet such cash backs are not only short-term aid for poor relatives. Emigrants also think about investing in their future (like buying flats or land) which is another way to boost the Polish economy. Of course, the main use to which  remittances are put is still everyday survival.

This situation, however, won’t last forever. Polish sociologists and economists say that this trend will probably reverse and future remittances will be considerably lower. The majority of Polish emigrants don’t think about resettling in Poland and their ties with the country will loosen as time goes by. They are more likely to invest their capital in the countries where they live, thus ending the flow of cash backs.

The Polish government used to tell media and society that the emigrants from the UK are coming back and are more than welcome in their motherland. The reality, however, was slightly different, as the dearth of good job opportunities didn’t exactly paint a rosy picture of life in Poland. It’s important to remember the difference in living standards – salaries for workers in the UK and Poland might differ, but there’s a huge difference in the purchasing power of the two currencies.

Very high salaries are only for specialists with loads of experience which unfortunately doesn’t apply to the majority of potential returning emigrants. The only chance for them to have a similar standard of life in the Polish economic reality is to open a small company. With international experience and know-how from more innovative markets this should be a recipe for success. Yet it isn’t, as business regulations are quite strict and the process of setting up an enterprise is one of the most bureaucratized in the whole EU.

According to Devesh Kapur quoted in Cash Back remittances may have a positive influence on market economies as the flow of money from abroad creates economic progress and may lead to a decrease in emigration and an increase in return migration. Unfortunately, that’s where the shoe pinches. Emigrant return to Poland may occur under two conditions.

In some ways the second scenario holds true if we think about Greece which used to be a popular job destination for Poles. Nowadays, the numbers of emigrants to Greece had decreased, but the Poles who left Greece emigrated not back to Poland, but to some other western country. So the only chance we have of seeing at least some people returning is to offer living standards in Poland that will be appealing to regular workers not top-managers.

But – the final question –  is a return to Poland by its emigrants really necessary? As always, there is no simple answer.

On one hand, the flow of emigrants makes employment a little bit easier for people still in the country. On the other hand, not to create favorable opportunities for their return is not fair on the emigrants themselves. After all, they are not the ones to blame; it was the Polish state that failed to keep them through its failure to provide proper employment opportunities and improve the living standard. The emigrants simply availed themselves of their right to travel and work in any place they like.

The Polish government should change its perspective on the emigration problem. Instead of focusing on re-emigration which is a short-term policy crafted for short-term financial gains, they should turn their attention to the new generation of young educated and skilled workers that would like to stay in the country. These people who have studied abroad on programs such as Erasmus, who have foreign language skills and work experience garnered during their study time, have endless possibilities of working almost anywhere. They differ from the current wave of emigrants as they’re already working (or will soon be working) in large transnational companies. They are not taking random employment in bars or on building sites – they know what they want and what their career path should be.

The brain drain problem should be a pressing issue for the Polish government, and a new policy aiming to keep these people in the country is essential. Given the current level of salaries, we can’t count on rapid growth in the next few years, so new laws favoring private enterprise need to be passed. If they’re not, the Polish government will have a tougher nut to crack than at present, because the expectations of the new generation will grow in proportion to their earnings abroad.

[1] This number might not seem astonishing compared to Polish GDP, but it’s significant in terms of the structure of wealth in Poland. In the poorest regions of Poland, a donation of 400 GBP from a relative is more than the average salary.