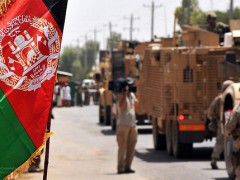 Afghanistan Flag During Hand Over of Lashkar Gah to Afghan Forces, Photo by DefenceImages on Flickr, CC BY-NC 2.0

Pakistan is embarking on a battle inwards and outwards at the one and the same time, a battle that will test its endurance like never before. A country with overstretched resources that is up against forces beyond its control might well have to face the consequences of its actions. This is what everyone is trying to make Pakistanis understand. Will Pakistan choose to re-engage with the United States or it will continue its policy of hide and seek? And how can the country re-engage itself in a region that has moved away from the policies it has followed for decades?

It is interesting to see how the civil and military leadership is emerging from the post Salala crisis: the civilian government is working with the military leadership to manage theiris unravelling relationship. It is also important to note how the whole burden has been pushed onto the shoulders of elected representatives, and how desperate Asif Ali Zardari was for a ticket to the NATO summit in Chicago. Maybe Asif Ali Zardari was keen to get attention from the US while appeasing the military back home. But I disagree with those who claim that the Americans post 9/11 have outmanoeuvred Pakistan. In fact if we look closely, the United States is following a set of policies that Pakistan proposed at the beginning. The US obsession to go after everyone “sponsoring or harbouring terrorism” led the United States into a decade of loss and failure. Eventually it decided to draw a line and sit down with those who were its number one enemies in the time after 9/11. This is the very scenario Pakistanis predicted ten years ago and we have now seen the opening of a Taliban office in Doha.

The frontline partnership between the United States and Pakistan also came to a difficult impasse, and time and time again I am reminded about the lack of trust on both sides. This mistrust has been at the forefront right from the start. With the change of government in Islamabad it became even more apparent. Drones strikes, Osama’s death and the attack on the Salala check point are all prime examples of how both sides mistrust each other. On the other hand, the policy to strengthen Hamid Karzai’s fragile government in Kabul has its own risks, especially given the withdrawal of US troops from Afghanistan. One thing is clear for sure: all three countries – the United States, Pakistan and Afghanistan – have learned nothing from history.

In my previous writings I have repeatedly referred to the damage caused to all sides by this lack of trust. On the Pakistani side most of their cards seem not to be working at the moment. However on a different note, the influx of Saudi money pumped into Pakistan is now setting the mood for changing dynamics. On the other hand the United States and Afghanistan have signed a strategic alliance more or less like the Status of Forces Agreement (SOFA) and Strategic Framework Agreement (SFA) Bush entered into with the Iraqi government.

Pakistan was crucial all along and still has a major role to play in building a stable Afghanistan. Pakistan could either continue its current polices, work for various sides and face international isolation or avoid it by engaging in a conclusive framework of dialogue. The continuity of current policies would only make its position hard in the arena of regional politics.

Strategic depth as they call it has failed so keeping it as an option would not be wise. It might have worked in the past but in the current situation it only works against Pakistan. The time has come to sit down with all sides and engage in constructive dialogue. If change is possible through dialogue with India then dialogue could yield favourable results with Afghanistan as well. In the event of failure there are chances that neighbouring countries might develop their own strategic assets. We all know there is no shortage of eager candidates sitting right inside Pakistan. The end result would be an utter disaster – civil war or worse. Ironically we have been through all this in late 1980s and we made the wrong choices then. We are going through the same situation now and we should not repeat the same mistakes. Perhaps the time for experiments have passed and time for right action has come.