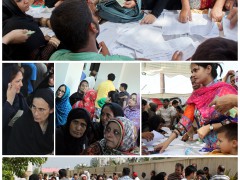 Right after the 2013 general elections ended in Pakistan, people took to the streets and social media with slogans like: “Where are our free and fair elections?”, “We want new elections in Karachi”, and the most popular one, “They told me to go home because my vote was cast already!”.  Election rigging is nothing new in Pakistan – the country has a long history of political parties winning through faked or forced votes. But the 2013 elections were unusual in the sense that this time citizens did not keep quiet but stood up for their right to vote.

After a whole week of protests against unfair elections, the people succeeded in forcing the Election Commission of Pakistan to stage new elections in some areas of Karachi– where most of the rigging took place. These protests inspire hope that the government elected this time will be held fully accountable for its actions, unlike the last government which failed the country in the economic, educational and many other sectors without any public scrutiny or dissent.  The good news is that as the people realize their power and claim their rights, the relationship between citizens and the state in Pakistan is being transformed. After years of mental slavery, the people have had enough and are no longer prepared to be the puppets of corrupt governments.

Yet despite of all the crass mismanagement and blatant vote rigging, I still believe that this year’s elections were relatively democratic. As a new Pakistan was being made during the election day, I was out and about to feel and capture the democratic change my country was going through. Below are some images of the moments that I will never forget as a Pakistani.

Heart-touching scenes as older citizens are determined to exercise their right to vote. At the top and bottom left, two elderly women are being taken out of the polling station after they have voted. On the right is the determination of the man who voted after several elections; believing that his vote would bring a change this time.

Young volunteers are helping the public with the voter verification process

Inked thumbs are the new fashion statement among the youth as the voting process is manual in Pakistan; people have to leave thumb impressions as an identity verification before they can vote. The photos above are from my Facebook homepage which was flooded with such content by the proud young voters.

People are waiting in extremely long ques with patience and determination outside the polling station. For some, it took half a working day before it was their turn to vote.

People are not being allowed to enter the voting rooms where supporters of a certain political party are casting fake votes.

Responsible citizens – especially young people – used social media as a weapon against all the rigging they witnessed. Street marches and peaceful protests were organized later on to force the Election Commission of Pakistan to hold new elections in Karachi – the city where most of the rigging took place.

A screen shot of a tweet by the internationally famous Pakistani actor and filmmaker Ali Zafar. At the age of 33, he voted for the first time in his life.