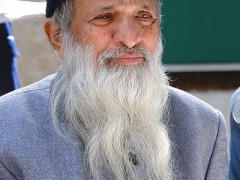 As the Pakistani successive regimes fail at achieving a superlative mark in the provision of basic social services to its people, we see how one particular man stood up and made a paramount difference in the lives of an entire nation.

Today when it comes to human development, governments in second and third world countries are known to suffer from continual drawbacks that limit their ability to progress. Now whether these drawbacks are circumstantial or self-inflicted is another matter, but one thing is for sure: governments seldom achieve good marks in sectors of civilian benefit. In times when governments fail to optimize development, the stage is left to non-governmental organizations (NGOs), civil society organizations (CSOs) and individuals to come forward and start progress in this sphere.

Now in common with other developing countries, Pakistan also faces the dilemma of having an inadequate government and a huge number of problems to contend with. But while the Pakistani government is failing to tackle internal issues due to a number of constraints (some of which will be discussed in this article), others have come a long way in creating benchmarks in terms of development. Notable among the top change-makers in the country is Abdul Sattar Edhi, the internationally acclaimed philanthropist, humanitarian and founder of the prestigious NGO the Edhi Foundation. Since the establishment of his NGO in 1957, Edhi welfare has been effectively helping the masses of Pakistan by development of the social welfare system.

One particular area in which the Edhi Foundation has excelled is addressing the poor healthcare system in Pakistan. Over the years, the Edhi Foundation has built numerous health clinics, orphanages, old peoples’ homes, free laboratories, animal shelters, soup kitchens and rehabilitation shelters for children and women. Moreover, Abdul Sattar Edhi has also created the largest single fleet of ambulances in the country with an unparalleled record as the largest private ambulance service in the South Asian region and one of the largest anywhere in the world. This unique service comprises of over two thousand ambulances in addition to its fleet of emergency response marine and air rescue vehicles. Now equipped with the latest communication systems, the Edhi Foundation’s emergency response team covers cities and urban and rural areas of Pakistan with successful rescue missions conducted even in the remotest parts of the country. In view of all this, it’s not surprising that the people of Pakistan hold the Edhi Foundation in very high esteem and affection as they recognize that Edhi’s social welfare system is much more effective than that provided by the government.

When this is pointed out, the government usually responds by pointing to the financial constraints it labors under and to the fact that it has to deal with a vast array of issues, not just particular ones. Now this is what we can call a phony excuse: for example, in comparison to the civil health system provided by the state of Pakistan funded by the national treasury and foreign and local donations, Edhi runs his program on a strictly non-governmental and/or foreign aid basis and conducts his revenue cycle on 100% civilian donor support. And yet the Edhi Foundation still manages to raise the appropriate amount of revenue to maintain its state-of-the-art equipment while with gross mismanagement of funds in the government sector few or no updates are being made. Furthermore, much like the national welfare system, the Edhi Foundation also deals with many civil society issues relating to shelter, food, health and general sustenance and is in no way as limited or constricted as NGOs are presumed to be.

Even the Prime Minister of Pakistan recognizes the immense contribution Mr. Edhi has made and is making in terms of social welfare and has nominated him for the Nobel Peace Prize. Now if only the PM started following Edhi’s shining example instead of just paying lip service to it, we could really start to progress as a nation. You see the major success of Abdul Sattar Edhi and the notable lack of success by the Pakistani government both relate to two essential differentiating factors: accountability and credibility. With full accountability and credibility – and furthermore with the trust of the people – Edhi manages to raise revenue for his cause, expand his organization and broaden the issues he works on. The government, on the other hand, faces trouble all down the line. In this context the Edhi Foundation also serves as a powerful inspirational model not only for the government of Pakistan but for other nations facing the same predicament as well.

To follow in the footsteps of this NGO, governments need to include the aspects mentioned above into their systems. This would benefit them immensely not just in terms of raising revenue but also in maintaining the trust of the people. It’s as simple as this: “actions speak louder than words” and at the end of the day this is the major point that distinguishes NGOs from governments: while NGOs have gained high levels of trust due to their proven creditability, time and time again governments have failed to deliver on their promises of development and improvement, and hence lack the trust of the people. But this all can change if governments bring accountability and credibility to their foundering welfare systems. This is the only way for them to retain the democratic support of the majority of the people and develop a strong donor drive. Until this happens in Pakistan, the hearts and minds of the people will continue to favor Mr. Abdul Sattar Edhi over the national government.