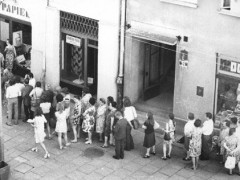 This part of the world has a long history of living in very rough social conditions. Their wealth of experience with rough conditions makes people here much more resilient in facing the so-called “crisis” the world is going through nowadays. Let me share my story and show you where people in Poland are coming from when they talk about social standards.

Queue – A typical day in the shortage economy of the 1980s in the Socialist People’s Republic of Poland. The memory of scenes like this is still fresh in people’s minds in Poland.

If I understand the question right, the enormity of these changes may cause radical new expectations about states, governments and all those state employees responsible for fulfilling our social needs. But to be honest, not everywhere have economic woes and changing demographics brought questions to the fore about the relationship between the state and its citizens. I can’t see such a question yet, and this problem is of no concern to us.

Nor can I say much about demographics changes.* But let me offer you some thoughts on this notion of “economic woes”.

1982, martial law in Poland. And no basic foodstuffs in the shops. Hard to imagine today, but it was a time when you couldn’t find any ham or yogurt within a distance of several kilometers. And you knew it was no use taking the bus to the next city, because they didn’t have ham or yogurt there either. There was not even toilet paper. But there were food vouchers. You were lucky if you had family in the countryside. If some delivery was made at the local shop, the news spread at the speed of light. People bought anything they could, even if they didn’t need it, because they could exchange it for what they really did need, like swapping vodka for cheese. Money didn’t work in socialism. People had money, but they didn’t have any food to spend it on. So queues were enormous. People would fight and queue committees sprang up to organize those standing in line. But that’s another story.

See queues in the People’s Republic of Poland on You Tube, 1987

So 1982. While at work, my mom was told that the nearest shop had received butter. So she took the day off, because standing in the queue prevented you from working for at least half a day. She stood in the line. And she got what she was queuing for! She was lucky because she was pregnant (with yours truely!) so she was allowed to take (just imagine!) half a packet of butter. Great! What a lucky day it was for her! She came back to the office and put this half a packet of butter on the outside window sill because it was colder. But something terrible happened. This precious half packet fell off the sill into the bushes below. And now imagine, this disaster had all the office staff – all my mother’s colleagues – looking for half a packet of butter in the bushes in front of the office.

Voucher from November 1982 alloted by the workplaces You can see that for one month, one person was entitled to 1 kilo of  flour, 0.25 kg of sweets, 2 kg of  sugar, 12 packets of cigarettes, one bottle of vodka, 0.1 kg of chocolate , and 0.3 kg of  washing powder. But there was no guarantee that you would find a shop stocked with all this.

Funny? It was reality just 30 years ago in Poland and people’s memories are still fresh.There are plenty such stories in my family and I could fill dozens of blogposts with them. There are plenty of such stories in every family in Poland. Of course if you belonged to the ruling communist party or milicia (police) or security services you were privileged  – but that’s another story too.

What I want to say is that people from this country remember how really bad it could be. And that what we have now outside and inside our homes is heaven compared to what we had in the past. People who can remember those days, and the level of humiliation they endured back then, will not complain for sure about their present social conditions. And probably their children won’t complain either. If we spoil our children, we may see people protesting. But nowadays this debate about “crisis” seems rather funny here in Poland.

And to highlight the message, I would like to share with readers of Future Challenges something said by a Latvian guy in anwer to a question on the crisis. “What crisis do you mean?” – he said “We were in crisis once, when they [the USSR – AK] were taking us away to Siberia. If someone has such a collective memory, they’re able to weather every crisis.”

* Poland has had quite a stable population (38 million) for the past two decades. We have witnessed a slow drop over the past few years mainly caused by economic migration (1 million) within the EU after accession.