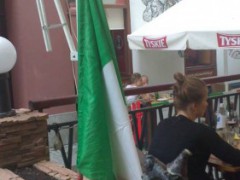 Wroclaw is a city with a complicated historical background:  in the course of its one thousand year history, the capital of the Lower Silesian District –Voivodeship- has been under Bohemian, Austrian, Prussian and German control, before re-becoming Polish in the aftermath of World War II. With its past, this city which was referred to as Flos Europae, “The Flower of Europe”, can be defined as some kind of civic compound of Central Europe and its culture.

The colorful center of Wroclaw. (Wikipedia, CC BY SA 2.0)

Today, however Wroclaw stands at the centre of media attention, thanks to its Italian community. Since the popular Italian newspaper La Repubblica dedicated four pages to the personal stories of young Italian emigrates, constituting what is now called the “Polish Little Italy”, the case was immediately covered by all major Polish newspapers and magazines, attracting also the attention of the German press and causing intense discussion in a country which still considers itself a land of emigration and not otherwise.  A few weeks ago even the Deputy Prime Minister of Poland expressly invited young Italians to develop their careers in his country.

So why do so many Italians choose Wroclaw? Because there is work for them there: it’s as simple as that.

Italian investment in Eastern Europe has created a big need for a workforce not just in the industrial or  manufacturing sectors but even in the developing service sector, which has in Wroclaw one of its little “European capitals”.

As a matter of fact over the past decade the city has been able to attract  a large number of foreign companies including such names as Credit Suisse, HP, IBM, Google and recently Quatar Airways, who have all chosen Wroclaw to relocate their human resources, their customer services and their IT facilities. In all these sectors language skills are fundamental. Italian companies, forced by the financial crisis to innovate and cut costs, chose to follow this trend in the area, creating a great on-site demand for “Italian speakers”.

Thus, Wroclaw has recently become one of the destinations of the so-called “new Italian emigration”, a topic which seems to be quite forgotten by the agendas of the main political parties. The average Italian emigrant nowadays is no more the desperate “man with the cardboard suitcase” –a typical image evoked by the waves of mass emigration that took place from the 1940s to the 1960s.  He – or she – is generally young, educated, multilingual, and with at least some experience of studying abroad in the Erasmus programme or something similar. Needless to say, people like this should be at the forefront of any serious economic reconstruction.

But with the Italian rate of youth unemployment reaching almost 40%, it is quite normal that people like these should choose to leave; and 65% of them choose Europe to start their career.

Italians who chose -or are chosen by- Wroclaw, are mostly fresh graduates with some work experience who are tired of the lack of possibilities in Italy and thrilled by the prospect of finally being able to test themselves, working in a multi-cultural environment and for a prestigious multinational company.

Hopes, however, are not always completely satisfied: Wroclaw might now offer many opportunities but it is nothing like a “life-chance” for a bright future.  Average salaries in fact, rarely exceed net 3000 zl, (almost 750 Euros), and although contracts on offer are normally open-ended, in general it is unlikely for candidates to have big pay raises over the years, and even successful climbing of the career ladder is quite rare.

Many young Italians arrive in Wroclaw to find work experience, improve their CV and increase their chances of eventually finding a better paid job in Italy or elsewhere. Wroclaw is more a transitional, rather than a definite or long-term destination for its economic immigrants. Wroclaw and its Italian community is a perfect demonstration of how the labor market functions in a globalized Europe.

“Krasnal włoski”: the Italian dwarf. The new arrived -on August 27th- of the “dwarf family” in Wroclaw, the very symbol of the Italian presence in the city. Photo taken by the author

In many areas the free movement of people and capital afforded by the Single Market has defined a new concept of emigration, deeply linked with the uncertain, mobile patterns created by  our present economic and financial system.

Against this background, we need to reconsider what we now mean by the term “immigrant”. In some respects internal European emigration today is much more “physical” than “mental” as the huge reduction of transportation costs coupled with the interactive and informative possibilities offered by the internet and mobile telephony have totally erased some of the most typical effects of emigration in daily life.