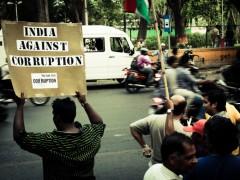 India Against Corruption – Protestors in Pune, India. By Nirzardp on Wikimedia Commons (Own work), CC-BY-SA-3.0

Politics is often associated with power and corruption globally. In the Indian sub-continent, its connotation gets darker, affecting human lives. But it is heartening to see that around the world, politics is embracing ICT as a means of not just propagate their political ideology, but also promoting and impressing change and development on the electorate.

India is witnessing a revolution to that effect. It is the rise and success, in parts, of a new political party called the‘Aam Aadmi Party’ (AAP) literally meaning the “Common Man Party”. AAP made its foray into politics taking the burning issue of corruption in Indian public life. The Indian sub-continent is known for its rampant corruption in public life – whether it is governance, or the private sector. AAP’s primary agenda is simple, yet strong: to fight and abolish corruption. This has enabled them to grow manifold in a dramatic manner in a very short span of time on the Indian political scene. Other political parties are also using ICT very effectively, but AAP’s appeal has been its commitment to fight corruption through transparency and accountability and driving home the message in a language that resonated with the common citizen of the country.

It is also interesting to note that other political organisations are banking heavily on the role of ICT in combating corruption, so much so that some of them have also announced the use of multimedia technology in their political agendas, which is a positive thing. It reflects the political will of the parties to not only be transparent and accountable, a key feature that is attracting millions of people but also embracing new tools of communication with the citizenry. AAP made a strategic entry on the scene by talking about dismantling traditional power structures that inhibit transparency and maintain the status quo. The AAP followed the basic ground rules of fighting corruption by ICT based actions by ensuring transparency, raising awareness, reporting corruption and promoting ethical attitudes among its cadres.

Interestingly, neighbouring countries of Bangladesh and Pakistan are already witnessing political clones of the AAP. Bangladesh had already shown interesting trends in its ICT4D progress. The 2008 Parliamentary Elections in Bangladesh saw leading parties prioritising ICT and e-governance in their election manifesto.

While the civil society is active in promoting ICT4D, it won’t be successful until mainstream governance makes it a prerogative to include them in their agendas. The key feature of developing nations is that ICT4D has been initiated from governance, while unfortunately in the developing nations it is being championed first from civil society and then being included as more of a necessity rather than prerogative by government hopefuls.

Political parties must embrace ICT4D in combating corruption in order to make it an issue of national importance by reaching the least common denominator of the republic. And anyone who can crack this will be able to plug the gaps in development and address pressing issues which the people will wholeheartedly welcome and also support. Governments in South Asia, or for that matter anywhere else, cannot successful govern if the system is ridden with flaws and errors, it will take a giant anti-virus to fix it.