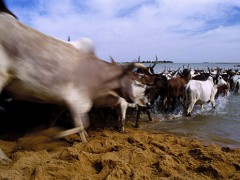 West Africa is swept by many rivers and water bodies that have kept the region irrigated and fertile along many parts of the coast. The Volta River and the Niger River are two large water resources that are sustaining large populations in many different countries. In times past, these two rivers were helped by the very large Lake Chad, once referred to as ‘a huge inland sea’, which has now shrunk to just over 10% of its original surface area.

As the water level and groundwater level drop, more and more people have tried to gather around the lake’s shortening periphery. This has led to all sorts of conflict between newly arrived and established land-owners or cattle raisers and peasant farmers. With this shrinking has come many social problems that have started spilling into neighbouring countries. Ghana – far down in the south has started to feel the effect of Lake Chad’s shrinking.

Nomadic herdsmen locally known as the Fulani have been forced to migrate down south in search of green pasturelands and water resources for their livestock.  These nomads have been said to come from Niger, Chad and Mali but their activities have interfered with the agricultural lifestyles of Ghana’s peasant folk and recently, as many as twelve herdsmen have been killed in an assault by disgruntled local farmers, complaining that the livestock have wandered into their farms and destroyed their produce. The Fulani themselves have been accused of murdering a total of eighteen people, coupled with rape and other cases in Ghana’s Eastern region over eighteen months. The Ghanaian parliament has set up a committee to investigate. In Nigeria, fifty people were killed in November after such clashes happened amongst the Fulani and the local Tiv tribe.

The problem lies further up north where climate change and irresponsible management of Lake Chad’s resources have pushed peasants off the drying Sahelian regions. Many of its tributaries have been dammed by its four surrounding countries for irrigation and other purposes. Nevertheless, there are ambitious plans on board to restore the lake by pumping water all the way from the Congo River in the heart of Central Africa into the River Chari which feeds the Lake Chad. Another plan would entail damming the Oubangui River at Palambo in Central African Republic (CAR) and channeling some of its water through a navigable canal to Lake Chad.

The potential for water wars in West Africa is huge. Burkina Faso and Ghana share over 80% of the Volta Basin and with increasing plans to use more water from the river, both countries are setting up a possible misunderstanding over the water resources in the future. Ghana relies on the southward flow of the river from Burkina Faso to feed and maintain its large hydroelectric dam that accounts for 80% of the country’s electricity needs. Another hydro dam is being built in the middle of the country at Bui to support the huge Akosombo dam.

Burkina Faso on the other hand, is damming up the river that flows downstream to Ghana, in the hope of making water available for irrigation to help it fight the downward march of the dry Sahel/Sahara region. This has the potential of reducing the flux of water into Ghana’s portion of the basin. Coupled with the social conflicts that have already started brewing with the shrinking of the Lake Chad, it will only take a prudent water management scheme and joint commissions by these countries to forestall any future wars over these water resources.

Steven Watson, in his piece, Liquid Asset, claims that “We already have the means to combat the water crisis”. He goes on to explain that it is not a lack of technology but a lack of action that is putting many lives at risk of not having enough water. After all, there is enough water in the world for everybody.

Aside all the prevailing technologies, what will it take to restore the water in the Lake Chad in spite of the threat of climate change? How should Ghana and Burkina Faso act responsibly in their sharing of the Volta River’s resources before things get volatile? Who should regulate the movement of inland nomads down to coastal areas in West Africa’s south in search of more fertile plains and water resources for their livestock?