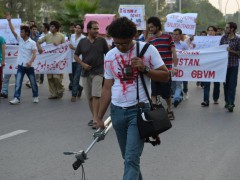 A couple of days ago, the country faced a nationwide electricity blackout for several hours when the main national grid station tripped and backups crashed. When we heard the news, the first thought that ran through the minds of many people, myself included, was that perhaps the army had overthrown the government and taken over, or perhaps some other terrible disaster had happened. This reaction isn’t surprising, given the country’s long history of military takeovers.

In just over a month from now, Pakistan’s civilian democratic government will complete its five year tenure, and this in itself is history in the making because never before in Pakistan’s 65 year history, has a democratically elected government completed its full term. While this might be good news for the country’s fledgling democracy restored in 2008 through general elections, people at large still remain dissatisfied with the government’s performance and the steps it has taken (or not taken) to remedy the overall worsening economic situation.

Since democracy in Pakistan is still very much at an evolutionary stage, people often confuse the failure of government with the failure of the democratic system itself. We have seen several stripes of political stakeholders trying to heap abuse on the government, with some of them even calling for its overthrown. This is why we have seen some movement in the recent political circus when Dr. Tahir ul Qadri, a moderate though highly controversial Islamic orator and former politician, decided to make a comeback with a massive rally in Lahore and another dubbed first the “Long March” and then the “Democracy March” in Islamabad.

His initial demands were limited to ending corruption and introducing electoral reform to make the upcoming elections more transparent. But his demands became ever more strident as he asked for the resignation of the president and prime minister and immediate dissolution of the assemblies. Now many critics and analysts believe Dr. Qadri has gone too far and is even perhaps a puppet of the military establishment bent on derailing democracy. There wasn’t much to add to Qadri’s credit as he had to face a little tussle of his own over credibility and intentions in the Supreme Court of the country.

Given the situation, there have been setbacks, some of which were severe — especially when the government and security agencies failed to protect Shia Hazara minorities against the threat of terrorist organizations. This led to protests in the Shia community and demands for the  overthrow of the provincial government and its replacement by the military. Even though the government made concerted – and successful – efforts to gain the trust of the protesters, we still can’t be sure that the danger has finally been averted.

Yet what we can say is that democracy has weathered all these setbacks and even though the country is going through its worst economic crisis which saps people’s confidence in government, the institutions of democracy are continuing to grow in strength. The country’s judicial system has also played its part by ensuring the government will be held accountable for corruption and other charges, even though the government has had to pay the price of losing a prime minister convicted for contempt of court.

So, in a few months, the country will elect the new government and I can only hope for a smooth transition towards a more powerful democratically elected civilian government. The threat of the rollback of democracy in Pakistan seems to have been thwarted – for the moment.