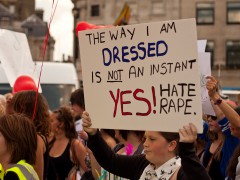 When celebrating International Women Day, I think how fortunate I am to have so many rights and liberties. All women in Britain have a right to education, job opportunities, health treatment and the vote, and they can travel, drive vehicles and marry (or not) whoever and whenever they desire. I myself was raised by strong women, and I wake up every morning knowing that I am entitled to respect, dignity and freedom –  and that if I work hard enough I can become whoever I want. However, looking at the world around me, I cannot help but notice that although I live a  relatively good life, there are certain issues which have an incredible impact on both men and women. The recent news about rape cases in New Delhi and Steubenville, street harassment and sexist attitudes in the media show that despite all our freedoms, we still live in a world of inequality.

We live in a culture of rape. And since the words ‘rape’ and ‘rape culture’ are important both in terms of their scale and magnitude, we urgently need to discuss them.

Rape culture emerged as a term from the 1970s second-wave feminists who wanted to encourage women to speak out about the horrifying reality of sexual violence. Coined from Susan Brownmiller’s term ‘rape-supportive culture’ it describes practices which it believes excuse, tolerate or even encourage violence against women. It was not until the 2000s that the term started to gain wider usage after a series of eye-opening and often tragic events. In 2011 a Canadian police officer suggested women remain safe by ‘avoiding dressing like sluts’ which resulted in the SlutWalks protest marches. In 2012 a group of five men brutally gang raped Jyoti Singh, killing the New Delhi student. This year after the rape of a 16 year old girl in Steubenville USA, we witnessed how the mass media like CNN focussed on the rapist rather than the victim, saying things like, ‘It was incredibly emotional—incredibly difficult even for an outsider like me to watch what happened as these two young men that had such promising futures, star football players, very good students, literally watched as their lives fell apart’.

Women protesting against rape culture at a Slutwalk in London in 2011: Photo by Garry Knight, flickr (CC BY-SA 2.0)

Toronto, New Delhi and Steubenville are just three of the well known examples of the horrifying consequences of what happens when the culture of rape is not addressed. There are thousands, if not millions, of stories as equally tragic and horrifying which never get presented in the mass media. In Britain itself there is a dreadful average of about 85,000 women who are raped in England and Wales each year, and over 400,000 women who are sexually assaulted each year. This means that in Britain every year almost half million of women’s lives are violated and broken. And there is still a huge number of unreported cases since sex offence conviction rates are low. Unfortunately fewer than one rape victim in 30 can expect to see her or his attacker brought to justice. In addition, the current British government has decided to cut preventive spending on gender-based violence from £7.8million to £5.4million. This is expected to reduce the help available – therapeutic and otherwise – to all victims of sexual violence.

Rape has the power to drastically effect people’s lives and it is crucial to talk about rape culture and tackle it. The basic assumption of rape culture is that women can be dehumanized objects, treated like sex dolls, raped  and abused while other people watch, laugh, joke and walk away. This definition does not mean that all men believe that women should be violated. There are two key points here. Firstly, there is a marginal group of people (rapists or would-be rapists) who operate on such thinking and make rape jokes to test the limits of what is and is not acceptable. Such rape jokes are based on misogynist premises and are gradually replacing more old fashioned jokes about women jokes.

Secondly, our daily practices are, or can be, shadowed by the rape culture. Rape culture is found in all sorts of places you and me engage with –  the places we work, the transport we take, the conversations we have. And while sexual violence is forbidden by law in many countries including Britain, it is glaringly apparent in the media we consume, the video games we play, the Hollywood movies and music clips we watch and the (lad) magazines we read. It’s no coincidence that there have been changes in British Board of Film Classification’s policy on depictions of sexual violence,  which show that as a society we are starting to push the boundaries of what we do and do not accept, and are starting to be more accepting of violence in general.

Living in Britain there are three things I cannot ignore: the way women are portrayed in the media, the rise of rape jokes and the catcalling and harassment so many girls and women face on the streets.

I would argue that sexist stereotypes dominate the front pages of British newspapers. In September 2012 the ‘Just The Women’ report was published based on a study of 11 daily newspaper study for two weeks. It revealed that in the dailiess ‘women are being sexualized, treated as objects or window-dressing and offensively stereotyped’ and ‘that sexual violence was often reported in a ‘titillating’ manner, or one which encouraged readers to “empathize with the perpetrator”’. The British Broadcasting Corporation (BBC) conducted their own research which showed how women are represented in media: as wives/mothers, passive victims, sex objects, guilty of having an unsatisfactory body type, or simply not represented at all. This seems hardly surprising given that 78% of front-page articles are written by men and 84% of those quoted or mentioned are male. Women are grossly underepresented when it comes to showing them as professionals who could share their expertise and knowledge on current affairs.

What we read, we come to believe is true: A woman on whoneedsfeminism.com shows why we need feminism. Photo by Gawker Media (CC BY-NC 3.0).

I also hear rape jokes in the British media as well. Comedian Reginald D. Hunter said that ‘civilization couldn’t have arisen without rape’ and Jimmy Carr has a whole kitbag of rape jokes ranging from ‘”What do nine out of 10 people enjoy? Gang rape’ to ‘What’s the difference between rape and football? Women don’t like football’. In 2010 the young sketch troupe Late Night Gimp Fight in Edinburgh offered absolutely no apologies when they played a scene where Sleeping Beauty wasn’t kissed awake by her prince, but raped instead. I think of the people who listen to these jokes and wonder how many rape or sexual violence victims are there and what they feel. It appears that rape jokes are ‘trendy’ and thus can easily enter our daily spaces, including our workspace. I hope never to read an article on how rape jokes are part of a business meeting.

I shouldn’t be surprised to be in a public situation when I could be “flashed” or called ‘babe’ by strangers. Organizations like Hollaback share thousands, if not millions, of stories of women around the world who suffer humiliating situations. The Everyday Sexist Project is a platform where women can share their experiences and which highlights degradation and hatred towards women.

I was at a conference, and one of the male attendees told me that things were boring, so I needed to get up on the table and give “the boys” a “good dance.” The man standing next to him replied, “I second that.”

I worked in a marketing consultancy for 3 years during which time I was subjected to regular sexist comments regarding my clothing (which became more and more conservative in an effort to avoid this), women’s potential in the workplace and questions about my sex life. I was also groped on a number of occasions by older male colleagues, one of whom had been assigned as my mentor, who also told me that I was too confident for a girl of my age and experience, and suggested that I behave in a more submissive way to appear more approachable to my male colleagues. I relieved him of his duties.

Coming home and telling my aunt that I feel sick whenever my 55-year-old boss stares at me from boobs down and getting the response “You can’t tell me that you don’t want men to look at you? Oh right, only the attractive 20-something ones then?”

With such stereotypes in media, rape jokes and street harassment can we still claim we live in a truly equal society?

Talking about rape culture is uncomfortable because of its taboo nature and the controversies surrounding  it. The topic is too often swept under the carpet, which it shouldn’t be, given the large number of reported rape victims and the even bigger number of unreported cases. Rape is a devastating experience, not only to the victims but also to their families and communities, and as such it should be discussed and prevented.

1) Stop excusing boys’ and men’s domination and gender privileged behavior with lames excuses like ‘boys will always be boys’. Both women and men are entitled to respect and dignity and should be allowed to live in a sexist-free environment.

2) Pay close attention to the way men and women are portrayed in media. Know how to understand the media messages. Should the way women are portrayed in sexualized video clips be taken as a role model for how they should behave in daily life? And should men see us as ‘sexy chicks’ rather than professionals? The more we trivialize gender stereotypes in the media, the more normal we make them.

3) Stand up against rape jokes and rape comments in everyday conversations  and situations. By remaining silent you are giving a green light to the ‘joker’ that such behavior is acceptable. The White Ribbon campaign in Australia is one example of how men can make a stand against violence against women.

4) Teach boys not to rape. There is a parental focus on warning girls not to be raped, which of course highlights the importance of  keeping girls safe. But the real core message is that men should not rape women. Why not teach boys not to violate girls?