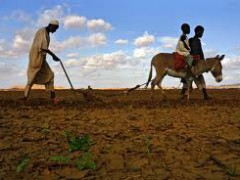 A Malian peasant farmer at work

The Libyan government, acting through a Libyan company MALIBYA, has acquired 100,000 hectares of land in neighboring Mali for cultivating rice and farming cattle in a move that has left a lot of local people wondering how their livelihoods will be affected in the next 50 years of the land lease.

The main reason given for the acquisition is to help Mali attain food security especially in cereal staples. In pursuit of this end, MALIBYA in collaboration with a Chinese company, are to help increase the per hectare yield of rice production from the current lvel of 2 tonnes to between 8 and 9 tonnes.

What this overlooks is the fact that Mali is a landlocked country in the Sahel region bordering the Sahara. Effectively, the useful land being snapped up is the country’s most fertile region along the Niger River. Most of the north of the country is a desert region which cannot support agriculture. On top of this, some of the outlying tributaries rapidly dry up in the dry season, making it difficult for many peasant farmers to sustain a living all year round.

MALIBYA has gone on to negotiate priority for water distribution when local waters dry up. The grand plans for the acquired 100,000 hectares include a 40km canal stretching into the desert and another 40km of roads along the canal. World food price hikes in 2008 alarmed the Libyan government enough for it to embark on this venture in a bid to help shore up the country’s food reserves. A Guardian report succinctly sums up the situation in Mali as follows:

“Mali is one of the countries most affected by the scramble for land, and Ségou, the country’s rice basket, is at the eye of the storm, with buyers from Senegal, South Africa, China, as well as domestic companies snapping up leases on thousands of hectares. This is land already intensively used in a country with one of the highest population growth rates in the world and where 80% of the people depend on farming for their livelihood.”

The most important consideration is that, in a country where the livelihoods of the majority are tied to the land, this major land deal by MALIBYA has taken farmers off their capital and robbed them of any means of sustenance. The only compensation arranged for them is a promise of new irrigation opportunities coming from the new canals.

Yet even that is not guaranteed when water levels drop and the huge corporations need more water for their operations. As one government minister put it, it is ‘a waste’ to bring in huge investment and put it in the hands of farmers who work only a few acres. In fact, as right as the minister may be, he may have lost sight of the fact that these ‘few acres’ are the only means by which these farmers are able to feed themselves and their families. The Great Land Rush explains that ‘the stark reality behind these land grabs is the displacement of long-term inhabitants, loss of livelihoods and threats to regional food security. Again, these land deals ‘erase or simply ignore the rights of people living on the land.’

But the farmers have not given up on their land. They have put together the first ever international peasant conference to fight the land grabs with participants from Africa, Europe, Asia and America. This conference, with the aim of stopping the land grabs, was held from the 17th to the 19th of November 2011. It was hosted in the Malian town of Sélingué and aimed to bring together about 200 farmers affected by land grabs as well as researchers, political figures, and NGOs resisting the unprecedented land-grab offensive by big business.

The hope is that corporations like MALIBYA will give the farmers better deals for their lost land. In the long run, the land should revert to the original owners so that they can re-instate their lost livelihoods. The Malian government owes this to its people.

How will Malian peasants cope with their lost livelihoods in the next half-century of their land’s lease? Will the government of Mali put measures in place that will give greater profits to these farmers? How significant is the international peasant conference against land grabs as a resistance forum against future land grabs in Mali?