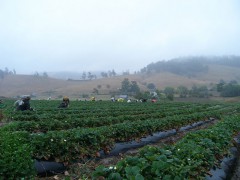 We’ve invented a new word and a social category for them. We call them “capsunari” – which roughly translates as “strawberry-picker,” a term which doesn’t, however, convey the tone of scorn and disdain we usually put into it.  About three million Romanians (13 percent of the country’s population) have emigrated abroad, most of them as low-skilled agriculture and construction workers to Spain and Italy (Source: World Bank). With €7 billion in cash transfers in 2008, they’ve made Romania – a country which doesn’t unusally figure in global rankings –- the 8th largest recipient of remittances in the world (source: Dilip Ratha, World Bank). Although cut in half by the economic crisis, remittances were still twice as high as foreign direct investments in 2010. In this same year the statistics directorate of the European Commission calculated that remittance flows to Romania were the largest in the European Union, outweighing those of the larger and more populous Poland.

World Bank orthodoxy says that remittances play an effective role in reducing poverty. They are tailored to the needs of the recipients, are more stable than private capital flows, and are countercyclical (meaning that they cushion against a downturn in consumption in times of economic hardship when both government spending and foreign investment are low). While acknowledging the need for sustainable policies dealing with these transfers, Samuil Simeonov’s “Cash Back” seems to adhere by and large to these beliefs. Household surveys from all over the world, including Romania, indicate that the repatriated earnings of migrant workers produce a net benefit for migrants’ families, boosting their income in the short-run.

So why all the mockery directed at strawberry-pickers? Why all the negative connotations?

A couple of years ago, a series of YouTube videos featuring Romanian migrants in Spain garnered hundreds of thousands of views. In talk stuffed with plenty of slang and bad grammar, they paraded their new found opulence in brand new hyper-deluxe limousines. Basically, they were boasting in front of “all those suckers” that stayed back home about how much money they had made as migrants. Not surprisingly, in a country where a teacher barely makes € 300 a month such videos were like a slap in the face from the illiterate nouveau riche.

On the same note, a summer road trip in rural Romania can show tourists some surprising sights: brand new BMWs with Italian and Spanish license plates, speeding at 140 km an hour down narrow village roads, or three storey, garish, pompous luxury villas built with the uttermost contempt for traditional local architecture standards, and plenty of “villagers” with strong Italian or Spanish accents. “Damn it, the strawberry pickers are back for the summer holidays!” is what any passer-by would say.

In a nutshell, although remittances have had some positive impact on Romania’s macroeconomic development, capital accumulation hasn’t been put to any productive use (like opening up businesses or longer term investment), but has rather been diverted to seemingly mindless consumption, including unnecessary housing updates and purchases of durable goods.

A representative survey from 2006 for the typical small Romanian town of Huedin where one of three households has a family member working abroad indicated that 52 per cent of remittances were spent on covering daily needs and expenses while only 6 per cent were directed at starting a new business. Even more tellingly, with the orientation of remittances towards real estate investment, house prices rocketed in the small community, reaching the level of the capital.

From a macroeconomic standpoint, had it not been for remittances, the current account deficit of Romania would have been 50 per cent higher than it is (source: Eurostat). Since remittances have mainly been used to buy current consumer goods (56 per cent of remittances went on consumption according to the National Bank of Romania), with the lack of domestic products and Romanians’ marked preference for foreign goods, consumption has been mainly oriented to imported goods.

Consequently, the volume of imports has increased and the current account equalization has been undermined by the trade balance deficit which reached € 15.58 billion in 2007, 50% higher than in 2006 (source: Popescu, Juverdeanu). Moreover, despite people’s increased expectations of future income flows, when the economic crisis halved remittances, consumption (including outstanding bank loans) could no longer be sustained by present income levels.

Last but not least, our currency has appreciated, but unfortunately not because of any increase in domestic competitiveness. Remittances have basically driven up the inflation rate and forced our National Bank to introduce some aggressive monetary policies.

In the short-run, remittances have undoubtedly brought prosperity to households. For the layperson, they translate as a proliferation of BMWs and luxury villas in Romanian villages. For the economist, they mean a disproportionate share of consumption in gross domestic production, a staggering trade deficit and inflationary pressure. The economic crisis has softened their negative effects, yet in the absence of well-crafted policies for directing them towards productive investment, once the economy picks up speed again, their biting effect will be felt once more…