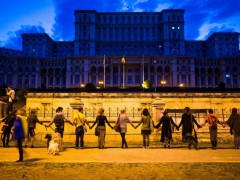 Romanian opponents of the grandiose mining scheme at Roşia Montană were delighted when a photo of American actor Woody Harrelson supporting their cause circulated for days on the Internet. Harelson is just one of the many people opposed to the project. But pressure on the Government is not yet  enough to force them to permanently shelve the cyanide-driven mining project for which the Canadian company Gabriel Resources has been trying to get the green light for over the past 14 years here in Romania.

Roşia Montană is a small village somewhere in Transylvania. But  for the past three weeks it has been the epicenter of Romania and many believe that the place might become a symbol of a new social and political conscience awakening in young Romanians. The mountains of Roşia Montană are said to contain many valuable metals, and the 300 tonnes of gold deposits estimated in the Roşia Montană region are currently considered to be the largest in Europe and the third largest in the world. For 14 years now, the Canadian company Gabriel Resources has been trying to kickstart operations, but without success as governments kept changing and opposition from civil society has been both vocal and tenacious.

But on August 27 the Canadian company’s hopes rose when the Government drafted a law granting the mining company a set of unconstitutional rights meant to speed up the start of operations. It was the moment when all the other well versed arguments against exploitation were again put on the table, principally the staggering amounts of cyanide and the wholesale destruction of the natural environment it involves (four whole mountains would have to be dynamited to get to the gold and other valuable goodies). Those in favor of the green light argue that it will bring much-needed jobs to the people in the area and money to the coffers of the Romanian state.

For over 20 days, and still counting, downtown Bucharest has been the venue for thousands of peaceful protesters. Photo: Cristian Vasile (used with permission)

But the question is: can we have both economic growth and environment sustainability or are the two impossible to reconcile?

The answer is that we could indeed have both, but not in the proposed Roşia Montană scenario which has aroused such widespread outrage. There are two main reasons for this: first of all, there is the question of cyanide: 13,000 tonnes of this highly toxic poison  will be used each year at Roşia Montană as opposed to the 1000 tonnes normally used each year in other European mining projects. Secondly, there is the matter of the risible terms of the actual contract negotiated which only gives the Government a meager 6% cut of the proceeds.

In short, opponents of the project paint a picture in which a foreign company comes to Romania, expropriates the people of Roşia Montană from their land, and most likely bribes politicians to act in their favor and pass special laws to speed up the start of operations. And the bleak bottom line of all this is around just 800 jobs that will last only as long as the project, meager royalties of 6% and the dismal legacy of a lake of cyanide, the disappearance of four mountains , the destruction of 2000 year old Roman galleries and the forced relocation of an entire village.  Small wonder that people are up in arms!

It is important to remember that Romanians opposed to the project are not against development per se, as is often alleged. They are for exploitation of resources and they do want economic growth. But they want it done differently! They want it done with much more care for the environment and a great many more financial benefits for the country. If Romania has so many valuable metals lying in the ground, why isn’t the country itself exploiting them? So we don’t have the means to do it by ourselves right now? Very well, then let’s wait for a little! After all, the gold and all the other metals aren’t exactly going anywhere. So let’s wait until somebody comes up with a better solution.

Sunday, 21st of September. On day 21 of the protests, people formed a human chain around the Parliament in protest at cyanide mining in Roșia Montană. It took thousands of people to encircle the world’s second largest building over a distance of almost 3 kilometers. Photo: Vlad Ursulean/Casa Jurnalistului (used with permission)

At this point in the Roşia Montană situation there seems to be no solution in sight that unites environmental sustainability with economic growth.  Bad governance and the complete lack of proper policies has brought Roșia Montană and other former mining areas to the present sorry juncture. Declared mono industrial areas, such places have been doomed to survive by mining alone and when the mining industry closed down, the people have simply been left to their own devices. None of the politicians that came to power after 1990 have given a second thought to creating new employment opportunities for the people of abandoned mining districts.

Ironically enough, the only growth and sustainability seen now is in the protest movement itself which has produced the most consistent turnouts ever in terms of numbers and the timespan involved. Around 25,000 people gathered on Sunday 15th of September in Bucharest alone, and many thousands more in other Romanian cities and cities around the world. Three weeks have now passed since people first took to the streets on September 1st. The peaceful atmosphere of these protests is another good reason why they have lasted so well. No noticeable incidents have been recorded and protesters have all the time in the world to vent their anger and dissatisfaction until their ultimate aims are achieved: rejection by  Parliament of the law specially tailored to accommodate Gabriel Resources and a complete ban on cyanide mining in Romania to prevent an irreversible ecological disaster.