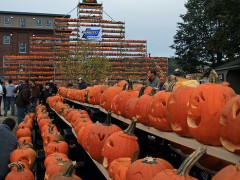 Food became more of an interest to me after I moved to the United States from Latin America, where I lived in Perú, Costa Rica and Colombia. I’ve struggled with my weight all my life so food was certainly on my mind, but nowadays I think of food beyond mere calories, or rather I think about food in other ways. Whether about the giant portion sizes at restaurants, the great variety of food available or the great waste of food seen as normal here, I’m still trying to get my head round the food culture in my new country.

Maybe I’m more aware of food because I expected to gain weight once I moved here. Right at the airport, I had my first reminder of why: the portion size. What I’ve known all my life as a large soft drink, here is called  “small” or “regular”. A portion of fries for a single person is actually enough to feed two. Whenever I eat out at a restaurant I always have to remember that portions are simply enormous. When my husband and I do remember, we agree on something from the menu and then we share it. When we don’t, I’m faced with the conundrum: do I eat it, gain weight and clog my arteries, or do I throw it away?

It’s not easy to make that choice. Which brings me to the second topic. Food waste:  I think this is a serious issue and I don’t want to be any part of it. However, here I am whenever I go to a new place to eat, wondering what the portion size will be, and how I will deal with extras. Will I pack them up and take them home? Am I willing to take away half a bucket of fries that passes as a “regular” size back home just because I ordered it – and then eat it all to the detriment of my health or throw it away and become one of those people “who throws away perfectly good food”? The road is paved with good intentions:  we’ve decided the solution is to stop eating out as much, e go to the market and buy healthy food to prepare meals … but because we don’t get around to making the food in time, it goes bad.

I know that one easy way to solve both these issues is to eat out less, plan our meals and actually cook more at home: that’s better on the waistline, the wallet and the world’s resources. So I go online to find healthy recipes and am struck with how many blogs have cropped up marked by the recession. People on very little income sharing with the world how they shop for groceries with 50 USD for four people for one week. Or the simple living movement that focuses on making time to eat good food by cooking it from scratch, raising chickens and baking your own bread. On TV I see shows like Extreme Couponing where a family can buy 15 cart fulls of groceries for pennies and piles of coupons. So I start clipping coupons from a neighbor’s newspaper supplement: all I find are coupons for prepared or processed food. I go to the corner grocery store and discover that buying fruit and vegetables is extraordinarily expensive. One whole dollar for a bell pepper – a dollar I could spend on two cans of concentrated tomato soup. At the farmer’s market I pay four dollars for a bag of mixed produce, a great deal, but which two people can’t manage to eat before it goes bad.

Despite all this I remain thankful about my “first world problems”. After all, I worry about excess food, not the lack of it. I am happy that I know how to cook, so when my brother gives me 15 apples his family aren’t going to eat before they go bad, I’m able to make an apple cobbler all of us can enjoy. I am grateful that while I am still learning how to manage food, I do have the resources to learn about how to cook yummier meals, shop smarter and eat better.

Many people in the USA don’t have that chance. Whether through lack of money, lack of options or lack of education, they don’t know any better. They eat what they can afford or what they like, but not necessarily food that is going to be good for their health. Or they want healthier food, so they head to one of the farmer’s markets that are now accepting food stamps… I can only imagine what they do when faced with a two dollar organic bell pepper. Or maybe they don’t have time to go out of their work commute to purchase food in farmer’s markets, so they stop by the places that take food stamps on their way to work. The other day I walked into a store that advertised that they take food stamps. The “food” options were 3 cans of lima beans, creamed corn and artichoke hearts, boxes of macaroni and cheese, pasta and tomato sauce in prepared cups, and lots of different sauces and condiments. And let’s face it, “healthy eating” is not taught in schools. At least I didn’t learn it there: I had to pay a nutritionist as an adult to come and help me control my weight. Thankfully, for those who can’t afford professional help to teach them how to make a healthy meal, there are people out there trying to get the information through to them. For example, cooking classes for immigrants living in “food wastelands” in New York City, as described in this podcast. In Cooking Matters for Families they teach people how to cook food familiar to them and available in their neighborhoods in healthy ways and with controlled portion sizes.  These courses are available in NYC, but what about other cities, smaller towns or other areas of poverty? Who is teaching them?  In Mexico, schools in indigenous areas [es] are including healthy eating in their school curricula which also benefits adults in the communities. In Canada the First Nations are also organizing to make nutritional education an integral part of the cultural heritage.  Can this be replicated at a greater scale?

What many people learn about food, where it comes from and where it goes to comes from media: advertising, promotions, and sometimes, even news. So when the media erupts in a frenzy about a bacon shortage, I wonder why they don’t react with the same outrage towards rice shortages in the east, where it means starvation for whole families. Why don’t they educate people about the other effects of the droughts, the fact that it will increase ALL food prices in general, and leave the poor with less flexibility in their spending once again to pay the price?  I don’t know. It’s not because of any  shortage of solutions:  Why doesn’t the media show what Tristram Stuart has to say about how to stop food wastage AND still have yummy pork to eat?  And the same solution would also help the forests and indigenous communities that are being driven out for crops to feed animals instead of humans.

I am trying to do my bit: eating more healthy food at home, splitting meals, or packing them to bring home. Now, with Fall, comes an extra challenge: learning to appreciate a cultural tradition that requires people to decorate their homes with food that will spoil.  Now, if we could just send those pumpkins (and the rest of all the perfectly good food we waste) to a poor family, along with a baby pig, maybe they’ll be able to get a nice meal out of it come Christmas time.

Pumpkin Festival by David Smith on Flickr, CC BY 2.0