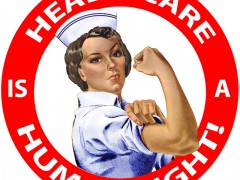 Healthcare Is A Human Right! by DonkeyHotey on Flickr (CC BY 2.0)

I dread the moment I need to see a doctor in Russia because I know that seeing a doctor in Russia is not a pleasent experience. The prospect of crass bureaucracy coupled with idiotic rules and endless waiting in line forces me to turn around and take the same medical procedures abroad.

Russia actually inherited quite an effectively organized healthcare system from the Soviet Union, but all that has now turned to dust. Average life expectancy declined after the collapse of the USSR (in 2010 it was 63 years for males and 75 years for females) while corruption and inefficiency in improving people’s health are destroying the system from the inside. Cardiovascular disease causes [ru] over 30% of all deaths in Russia, a figure twice as high as that of the US and Europe while the lack of proper infrastructure and the rampant problem of under-the-table payments plague hospitals and government clinics alike.

Even though every Russian citizen is entitled to free healthcare and an army of doctors work in Russian hospitals, it is very difficult to get proper medical assistance. Elderly people often have to stand in line for hours only to be given some awful substandard medical treatment in the end. It is humiliating and very inconvenient. And even if you pay a bribe  for the ‘free’ treatment, that’s still no guarantee that you’ll get proper attention from the medical personnel.

The Russian healthcare system stands together with law enforcement authorities as the two most corrupt agencies [ru] in the country. This is not surprising as the average salary of a medical worker is around $600 while the average salary in Russia [ru] is $800. People work long extra hours and don’t get paid for them.

A failing state –  a failing society?

In a situation where a government fails to perform its duties, the people are left on their own. But this does not mean there’s no way out. If you cannot get even basic treatment, what should you do when an emergency strikes? A lot of people are realizing that they only have themselves and their own communities to rely on.

When 14 year old Efim Oleynikov received a serious brain injury in a car accident, his medical disaster was about to begin. The driver who hit him said he hadn’t noticed Efim crossing the road and that he was very unlucky to be in the wrong place at the wrong time. Even though he has a right to free healthcare in Russia, doctors simply couldn’t help him as they don’t have the expertise so they sent him home. His condition was deteriorating when his family decided to take action. After active online fundraising and campaigning [ru] the boy was flown for treatment in Israel. His family is still trying to collect more money for further treatment in Germany.

This is just one of many cases where people have helped each other. Small donations have helped a lot of sick people all across Russia. Most of the donations are small, but even $5 can make a difference.

One solution for all?

Clearly this solution cannot be universal. First of all, online campaigning requires tremendous dedication and effort yet many people simply have no access to modern technology and have no idea where to start.

People donate money because they have a sense of community. They either know a person in trouble or live in the same city or area. Even though Russian online activists are often criticized for their low offline activity, this is a case where online activity has really helped many people in real life. Re-posting and spreading the news is one of the most important aspects of online donations. If you cannot donate much, then donate a little and spread the word. This way, the more people donate, the better it will be for the common goal.

Obviously charities can never replace what is the work of the state. Any government should be able to create and maintain a healthcare system that will work without the need for bribes and kickbacks. After all, why do Russian politicians prefer to take medical treatment in Israeli and German hospitals rather than in Russian ones? I think it says a lot about the ineffective system of healthcare in Russia that even its own leaders don’t trust it.