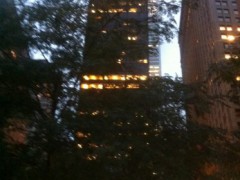 In this building facing Liberty Square probably more people are working than there were protestors down at the Square on Friday morning when the cleanup was postponed.

So the question is legitimate: Is this protest a “small” protest since only 3000 people are physically present? Or is it really something big which (meanwhile!) traditional media and the Internet is trying to convince us?

One could say that for the very first time in human history we are witnessing a seamless cooperation between the offline and the online world. While in numbers only a few are literally out there many more in the online world via social media and various other tools (such as wikis, ushahidi, vibe just to name a few) make this event a real big one and connect the dots to a worldwide event in which millions can participate.